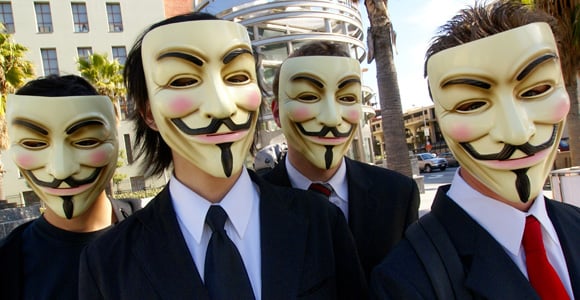 Some celebrities wear a Guy Fawkes mask at comic book conventions to walk the floor unnoticed, some people wear it as a costume but the mask made popular by Alan Moore and David Lloyd in their 1980 comic series V for Vendetta has also become a symbol for the masses, something the creators are particularly proud of.

Both writer and artist recently spoke to the press about how the distinctive mask has become popular for use during protests. Most recently Anonymous used them to protest Scientology and protestors in Zuccotti Park used them during Occupy Wall Street.

“The Guy Fawkes mask has now become a common brand and a convenient placard to use in protest against tyranny—and I’m happy with people using it,” Lloyd told the BBC, “it seems quite unique, an icon of popular culture being used this way.”

“I suppose when I was writing V for Vendetta I would in my secret heart of hearts have thought: wouldn’t it be great if these ideas actually made an impact?” Moore recently told The Guardian in a rare interview. “So when you start to see that idle fantasy intrude on the regular world… It’s peculiar. It feels like a character I created 30 years ago has somehow escaped the realm of fiction.”

V for Vendetta is a story set in a dystopian British future where a totalitarian government keeps a strict lockdown on its citizens. A vigilante, who goes by the codename V, rails against them and rallies others to his anarchic cause while dressed as the real-life historical figure, Guy Fawkes. In 1605, Fawkes made a failed attempt to blow up the British House of Lords as part of the Gunpowder Plot but went down in history for his cause.

The mask had been used for years before the comic during Guy Fawkes Night celebrations. It wasn’t until the 2006 film, adapted by the Wachowski’s for the big screen, that the iconic mask shot to popularity. “My feeling is the Anonymous group needed an all-purpose image to hide their identity and also symbolise that they stand for individualism,” said Lloyd, who has apparently visited Zuccotti Park to see the protests first hand. “V for Vendetta is a story about one person against the system.”

“When you’ve got a sea of V masks, I suppose it makes the protesters appear to be almost a single organism—this “99%” we hear so much about,” said Moore. “That in itself is formidable. I can see why the protesters have taken to it.”

According to the BBC, “Rubies Costume Company, which makes the mask, sells around 100,000 a year worldwide, and 16,000 in the UK, according to spokesman Steve Kitt, who seems a little concerned that any association with activists might harm the company’s image.”

“I suppose I’ve gotten used to the fact, that some of my fictions percolate out into the material world,” said Moore. “I think it’s appropriate that this generation of protesters have made their rebellion into something the public at large can engage with more readily than with half-hearted chants, with that traditional, downtrodden sort of British protest. These people look like they’re having a good time. And that sends out a tremendous message.”