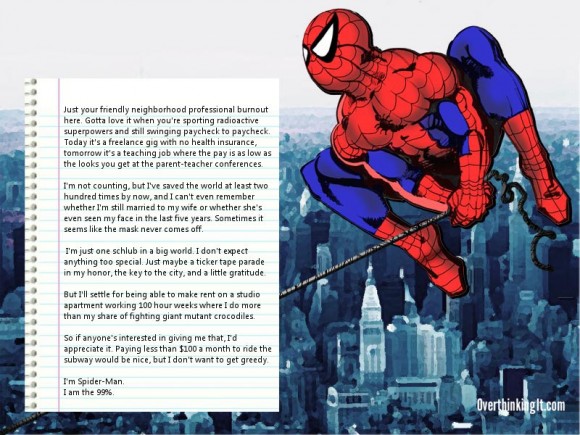 Here’s a bit of a change of pace for The Mary Sue … or is it? Generally, we don’t cover politically-related news unless it falls into exactly this scenario: when Spider-Man, Batman, and April O’Neil start showing their support for the Occupy Wall Street movement. After the jump, see which geek characters have joined the protest against income equality … and who’s part of the 1 percent!

April O’Neil, confidante of the Teenage Mutant Ninja Turtles, on her reporter’s salary and the poverty-stricken mutants with whom she hangs: 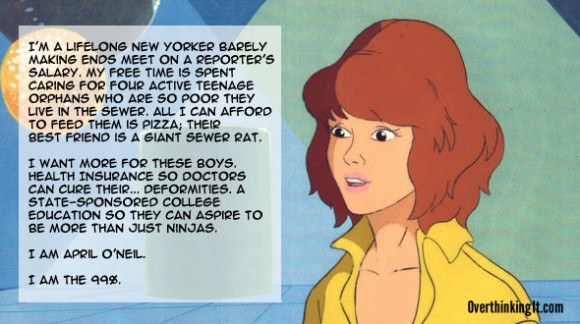 Luke Skywalker became a defender of the galaxy and a Jedi warrior. But you know where he came from? The 99 percent. 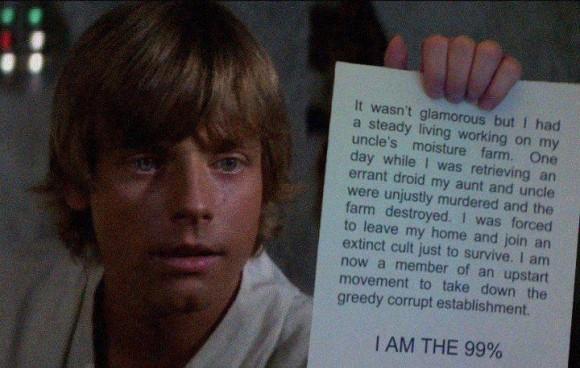 Superman is an undocumented immigrant who makes it his business to defend truth, justice, and the American way while also holding down a day job as a journalist. (Like April O’Neil!) He doesn’t have to, he just does it because he’s a super kind of guy with just his superpowers to offer. 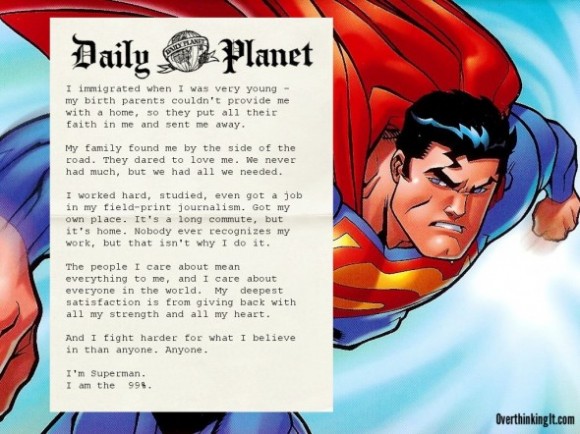 Rorschach needs no editing to show his feelings on the matter, just a direct quote from Watchmen. He’ll still begrudgingly watch out for the 99 percent. As long as they’re not hanging out in seedy bars. Or a dog that through no fault of its own belongs to a serial killer. 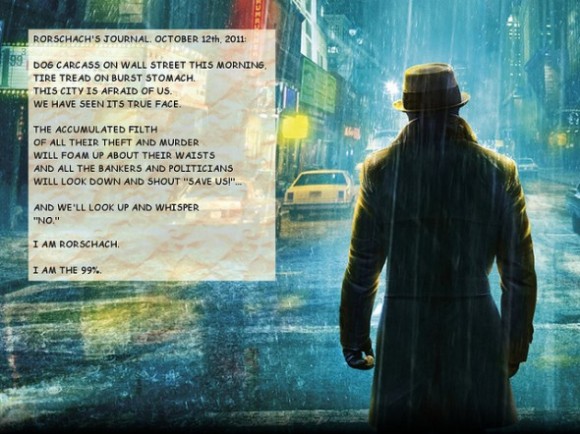 Of course, not everybody’s a part of the 99% (otherwise it’d be the 100%), but some of our favorite superheroes still show their support for the people they defend. Like Batman, who uses his riches to help the people of Gotham’s 99 percent. 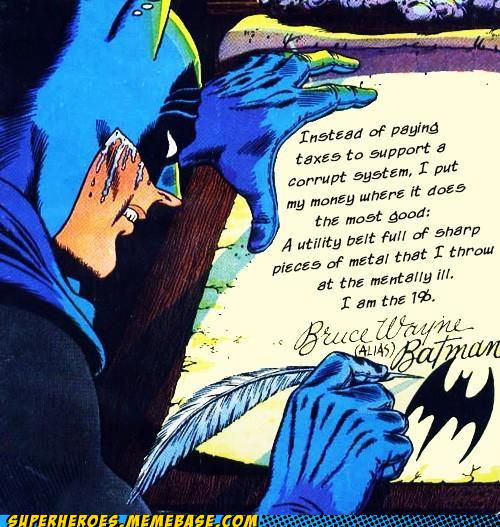 Okay, maybe that wasn’t the best example. Have another Batman: 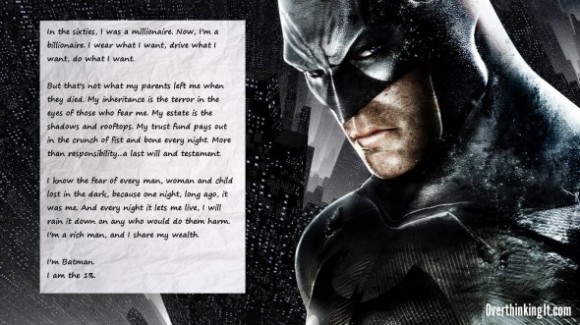 And Comics Alliance has compiled some great examples of the 1% who are villains, giving us excellent examples of why the trickle-down theory is not effective. Here is Lex Luthor, blaming Superman, for making his happiness a little more expensive to buy: 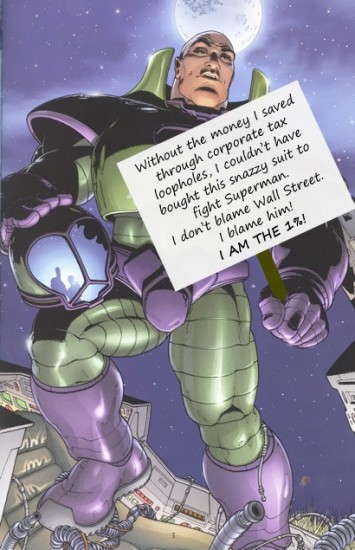 Doctor Victor von Doom tried to steal the stolen treasure of Blackbeard the Pirate. Two wrongs don’t make a right. He’s making it very hard to root for him. 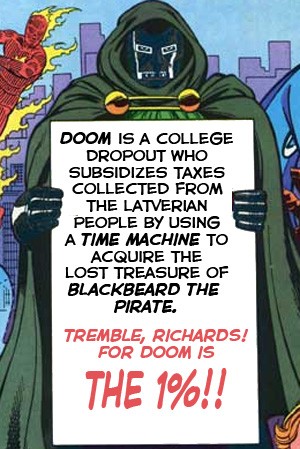 Don’t be fooled by the Kingpin’s “pulled himself up by his bootstraps” businessman act — unless “business” means “deeply entrenched in the dark world of organized crime.” 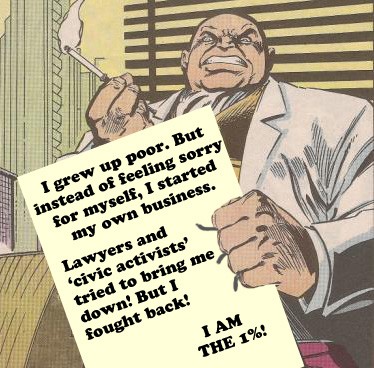 Norman Osborn is filthy stinkin’ rich … and that’s how he can develop all those evil villain toys. For himself. Really, Norm? Not going to create jobs and hire some henchmen? 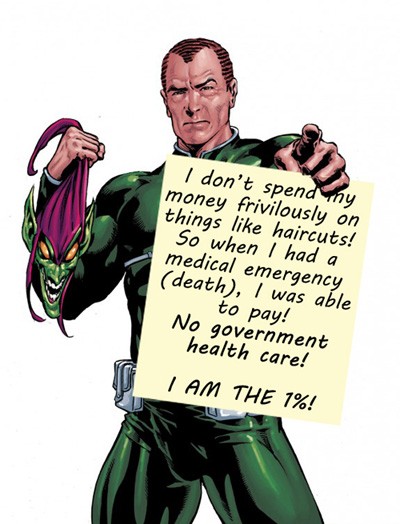 Something tells me Scrooge McDuck doesn’t have any guilt. How can he? He’s got all that money to swim in! He hasn’t the time to feel guilty! Scrooge McDuck is so rich he doesn’t even have the Internet. Why? He has already bought all the interesting things he needs in the world! 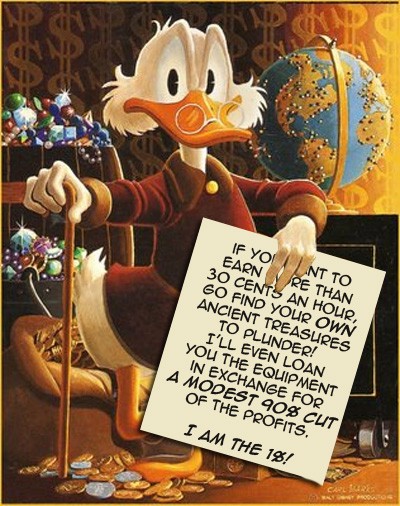 And Deadpool … has no idea. He’s just Deadpool. 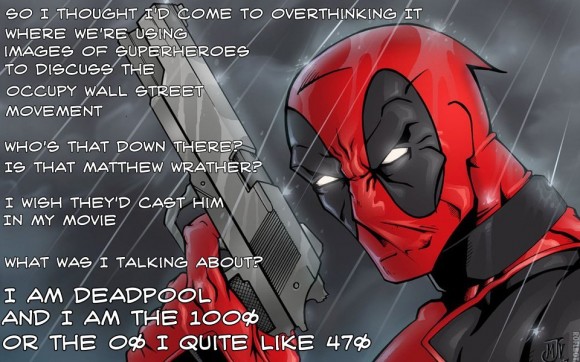 (Found on Comics Alliance, Overthinking It, Memebase, We Know Memes, and Chris Arrant)