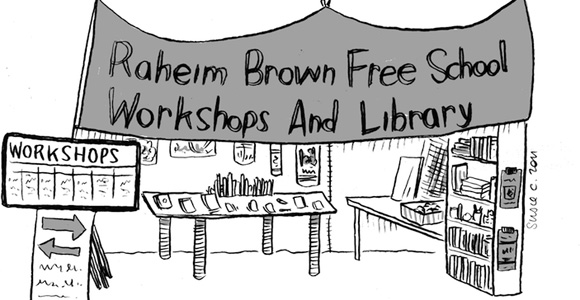 Cartoonist/journalist Susie Cagle drew the illustration above at Occupy Oakland, one of the California branches of the Occupy Wall Street movement. It depicts the Frank Ogawa/Oscar Grant camp 12 hours or so before it was raided. Cagle’s objective as a journalist is to cover Occupy Oakland in an illustrated history but this is the only piece she’s been able to post on her website since she was tear gassed one night and arrested on another. She’s now posted an article giving her personal account of her handling by the Oakland Police and let’s just say, it won’t win them any service awards.

Cagle was arrested last Thursday after doing what she thought the police told her to do. She was also wearing official press credentials and was recognized as a journalist by one of the police on site. She was sent to two different police stations, held for fifteen hours and eventually charged with failure to leave the scene of a riot. Cagle has spoken to a few news sources but has now published her own piece on AlterNet.com entitled: “Police State in Oakland? One Reporter’s Arrest Contradicts Official Story.”

In the article, Cagle documents everything that took place the day of her arrest. “A series of escalations at Occupy Oakland following Wednesday, November 2nd’s General Strike culminated in 101 arrests between 1 and 2 am on Thursday morning — including my own,” she writes. Interim Oakland Police Chief Howard Jordan called for the OPD to descend on the area after several businesses had been vandalized. And then confusion hit:

Over the course of two hours sitting handcuffed on a curb before being transferred to jail, I asked arresting OPD officers what their dispersal orders had been in the minutes before and after 1 a.m. They smiled and laughed. “We told you guys a million times, go back into the tents,” they said.

“The tents, the tents,” they emphasized.

No one I spoke with since Wednesday night heard this order, or understood it when discussed.

Whatever the case, Cagle and others were arrested. And as if that wasn’t bad enough, her treatment at the hands of the OPD made things much worse.

First, we were split up by gender for transport a few blocks south to be booked. This took three hours. Upon arrival at North County jail, we were searched by Alameda County sheriffs (“Do you have any weapons of mass destruction?” they asked while grabbing at our breasts) and urine tested for pregnancy. That night bled into day, when all 25 women were transferred to another jail 40 minutes outside Oakland, because no jail in the city is technically equipped to handle female inmates.

Upon transfer to Santa Rita jail, demonstrator Andrea Barrera was denied her prescription antibiotics and threatened with recourse. “Maybe I’ll accidentally lose your paperwork and you’ll be here all week,” Sheriff Fox told her, only one of many times such a threat was made against us “prisoners.” Barrera did not receive her medication until her release.

And then, things went down an even darker, more degrading path for the journalist.

After transfer, we were subjected to another round of searches, this time more invasive than the last. While standing single file in a hallway with male inmates leering and licking the windows in their cell doors, we were told to hold out our bras and shake our breasts. “Come on, ladies, shimmy,” said one sheriff. “Get into it. Shimmy.”

Cagle doesn’t describe how these events made her feel personally but we can bet she and the other detainees weren’t the least bit impressed with their time with the OPD. However, she did tweet this, “The truly shocking thing about my jail experience is that it is not actually shocking at all. That stuff happens all the time.”

“At a time of such intense public scrutiny, the Oakland Police Department made the mistake of arresting a journalist, and sending her into the heart of an ugly process with which not only demonstrators but many other Oakland residents have long been familiar,” wrote Cagle in her article. “They gave me an unmatched, visceral opportunity to understand what makes Oakland residents so angry with the police.”