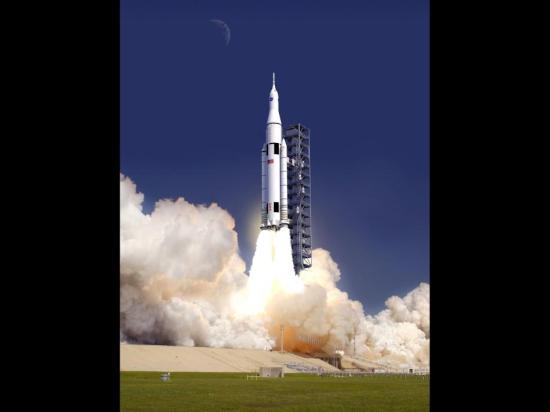 NASA has just announced its next development project: The Space Launch System (SLS). SLS will provide NASA with heavy-lift capability the likes of which it has never previously seen. To boot, the development of the new rockets will likely include re-purposed shuttle material, making this project particularly cost effective. The project aims not only to replace the Shuttle program with a sustainable alternative, but also to considerably improve the distance mankind can reach into the abyss.

The SLS rockets will be able to carry the Orion Multi-Purpose Crew Vehicle and other types of cargo into orbit with relative ease. Powered by liquid oxygen and liquid hydrogen fuel, a Space Shuttle RS-25D/E engine for the core stage and a J-2X engine for the upper stage, the SLS rocket should be able to put out a base lift capacity of 70 metric tons, upgradable to 130, beating out the Saturn V which topped out around 118.

That lift power will come in handy too. The SLS will be the first exploration-class vehicle since the Saturn V, which took astronauts to the moon. The power behind it will also greatly increase its reach into the solar system, making it far more practical to reach destinations such as Mars, its moons, and even beyond that. This new project could represent and exciting, ambitious new phase for NASA, an idea NASA itself is encouraging. Administrator Charles Bolden had the following to say:

This launch system will create good-paying American jobs, ensure continued U.S. leadership in space, and inspire millions around the world. President Obama challenged us to be bold and dream big, and that’s exactly what we are doing at NASA. While I was proud to fly on the space shuttle, kids today can now dream of one day walking on Mars.

As exciting as this all is, we’ve got a while to wait. The first developmental test mission is slated for late 2017 and there’s plenty of time between now and then for additional delays. Still, it’s good to see the ball rolling. Hopefully we’ll get to see another historic manned landing before July 2069 rolls around.