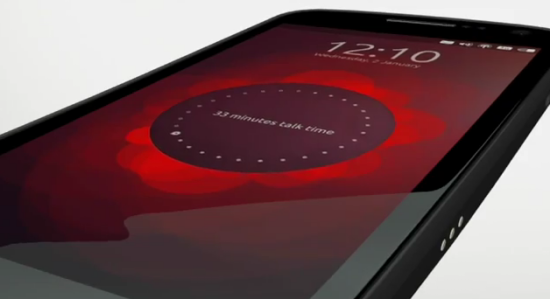 For days now Ubuntu’s site has featured an ominous countdown and the words “So close, you can almost touch it.” The countdown ended with the release of a virtual keynote by Canonical founder Mark Shuttleworth touting a new mobile version of Ubuntu, and the “Ubuntu Phone.” Shuttleworth says the new goal for Ubuntu is to create “one platform for all kinds of computing.” The aim is have Ubuntu powering phones, computers, television, and the cloud.

The keynote video starts with a solid five minutes of Shuttleworth patting himself on the back over the successes Ubuntu had this year, and admittedly, it had many. When Ubuntu 12.10 “Quantal Quetzel” released they did so with an ad saying users can “Avoid the pain of Windows 8.” Having just purchased a laptop with Windows 8 installed, and even more recently replacing Windows 8 on that laptop with Ubuntu, I can say first hand there’s something to that statement. Now Ubuntu wants to bring that to phones, televisions, and the cloud.

The focus of the video is on the platform of the Ubuntu Phone, which will be on display at CES later this month. One feature Shuttleworth points to heavily is that there’s no lock screen, which seems an odd thing to brag about. Ubuntu Phone will also feature what Shuttleworth calls “one search to rule them all,” making it easier to find exactly what a user is looking for from one search window. At first blush it seems similar to Google Now.

Similar to how the latest desktop versions of Ubuntu prominently feature web applications, Ubuntu Phone promises to treat them as “first-class citizens” as well. Any web apps can use the full feature set of the phone, including its notification system. They also promise rich native apps, including games.

Edges on the Ubuntu Phone screen each have a different function, and provide quick navigation through the menus and features of the system. The Ubuntu Phone also features voice commands, which promise to be simple and across any application.

The video focuses on the platform and doesn’t address the specs of the phone, but does give details to developers on how they can get their app on the Ubuntu Phone. This is exactly the same way developers can currently get applications on the desktop version of Ubuntu, but includes HTML 5 applications as well.

One big feature is that beyond the physical Ubuntu Phone, Shuttleworth claims any hardware that can run Android will also be able to run Ubuntu OS. Which is good news for anyone like me who recently upgraded their phone, but is still incredibly excited to give the new Ubuntu Mobile OS a try.

You can watch the full keynote below: