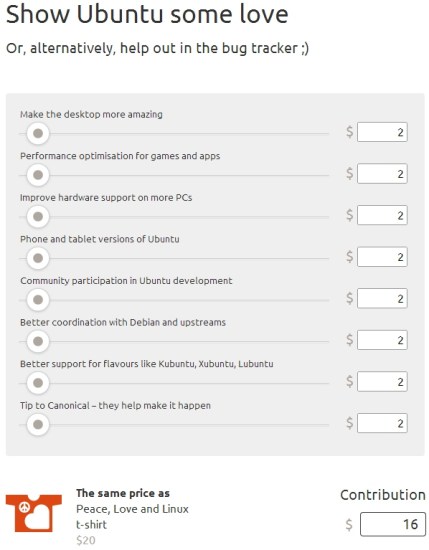 Whether you’re using OS X, or still refuse to update from Windows XP because “it’s the last good Windows,” the Big Two aren’t the only operating system games in town. There’s Linux, of course, and a lot of it. The most prevalent user-friendly versions of Linux are probably Ubuntu, Mint, and Red Hat. Normally, Linux distros are free (though Red Hat found a way to be for pay long ago), because that’s the whole point. When an experienced user that hasn’t tried Linux before tries a popular Linux distro for the first time, a common sentiment tends to be that, man, Linux would be so good if only there were enough money behind it. Canonical, the developers behind the popular Ubuntu distribution, are now passively asking for money through an optional donations page that allows users to choose exactly where their money goes.

When I say passively, I mean that the donations page is actually a little difficult to find, and only seems to appear when attempting to download Ubuntu, as I couldn’t find a standalone donations page. The donations are similar to what you may be familiar with indie gaming bundles: You can add a total amount, then play around with sliders to choose what to split your money between. From giving money to the standard desktop development, tossing money at mobile development, or even giving money to optimizing game performance, you can be fairly selective about where your money goes. Canonical has previously accepted donations, but this time you can feel good about choosing what development your money helps.

Now, unless people start shelling out some serious cash for this pay-what-you-want donation scheme, Ubuntu will probably just continue along its (relatively fine) development path. It’d be amusing to see Canonical add a “develop an option to remove or customize the Unity bar” option into the donation selections, because that’d most likely end up the big bread winner. Canonical notes that with these new tailored donation selections, they’ll essentially get direct feedback as to what they should focus more heavily on. They also reassure us that Ubuntu will “always be free to use, share and develop.”

Hopefully, this new donation scheme will funnel some money toward Ubuntu’s development, because Ubuntu is quite a nice operating system, but is missing key features that would make it more attractive to the less experienced user, such as the stark lack of popular (or properly working) games available for the operating system, or the issues Linux faces with a wide range of hardware support and drivers. Until then, I guess we can all just use the Hannah Montana Linux distro.

Since it seems to be a little hidden, you can donate to better Ubuntu here.