Twitter Has Been Verifying Accounts of Fictional Characters | The Mary Sue 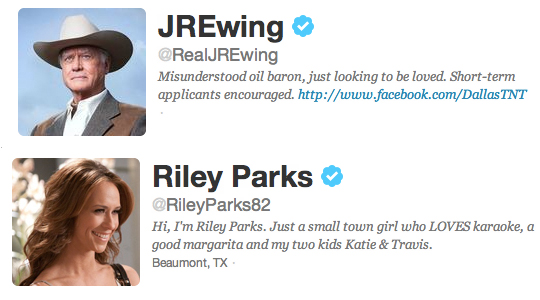 Twitter’s account verification is one of the most useful tools in the land of social networking. Considering the 140-character social network’s best feature is allowing celebrities to reach out to us normals, it’s pretty important that we know we’re dealing with the actual person whose tweets about lunch we’re reading. Twitter, however, seems to have taken the verification process a step further, and is now verifying accounts of fictional characters as if they were real life people.

It would seem that J. R. Ewing of Dallas fame, and Riley Parks, played by Jennifer Love Hewitt, of the new show The Client List, both have officially verified Twitter accounts. Not the actors that play the characters, mind you, but the actual characters themselves. While this is certainly an interesting way to advertise and promote a product — in this case, television shows — Twitter verifying people that aren’t actually real and therefore cannot actually be verified seems a little silly, and takes away from the whole point of verification.

Surely, a great deal of people living in 2012 and using Twitter will be able to identify Jennifer Love Hewitt’s Twitter avatar, but the same probably can’t be said for J. R. Ewing, until (maybe?) the new Dallas show releases and becomes a recognizable hit. However, there are definitely people who won’t recognize either of the two characters, and officially verified accounts could easily cause confusion.

We took at look at Twitter’s verification policy, and the wording of it doesn’t exactly prevent the verification of fictional characters:

Twitter proactively verifies accounts on an ongoing basis to make it easier for users to find who they’re looking for. We concentrate on highly sought users in music, acting, fashion, government, politics, religion, journalism, media, advertising, business, and other key interest areas. We verify business partners from time to time and individuals at high risk of impersonation.

We do not accept requests for verification from the general public. If you fall under one of the above categories and your Twitter account meets our qualifications for verification, we may reach out to you in the future.

Technically, they don’t say they only verify real people. One could easily argue that, technically (again), J. R. Ewing is real in the sense that he is a fictional character from real life. Whatever the argument, we haven’t seen too many of these verified fictional accounts, and though they’re pretty much against the whole point of what one would assume verification is for, maybe Twitter has a way to make money on their hands that doesn’t consist of spamming people’s Twitter feeds with sponsored tweets.

(thanks Dan and Keith!)