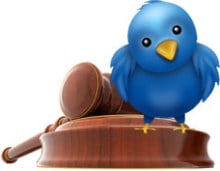 Social media makes for a tempting treasure trove of information for a lot of different people. Naturally, the government often has an interest in checking out your private social media interactions and since social media is such a new phenomenon, at least in legal years, the method of getting that info has yet to be firmly established. That’s why it’s so important for social media companies to put their foot down on privacy issues to protect their users. That’s exactly what Twitter is doing in the case of Occupy Wall Street protestor Malcolm Harris.

After Harris’s arrest in connection with a protest on the Brooklyn Bridge in October of last year, the Manhattan DA subpoenaed Twitter for any and all information relating to Harris’s account between the dates of September 15 and December 31, 2011. Harris, of course, tried to fight the subpoena himself, but it came down to Twitter to do the real heavy lifting due to some TOS language which means that Twitter technically owns the license to the things shared on its service, largely for technical reasons. Fortunately for Harris, and all of us really, Twitter is now fighting the subpoena, arguing that the lack of a search warrant makes this an illegal search and seizure.

In addition to arguing that the subpoena violates the fourth Amendment, Twitter is also making a more self-interested, but still valid, argument that Harris, and other users in his situation, should be able to fight subpoenas such as this themselves. If they are not, it puts an unfair burden on Twitter to fight for each and every user, every time such a case should arise. That, or just hand over the info all the time, a solution law enforcement would no doubt prefer.

For Twitter, this whole situation is a pain, but has the potential to really benefit them. For one, it’s making them look like defenders of privacy, in contrast to say, the pro-CISPA Facebook. It’s also a move to ensure that they won’t get wrapped up in this sort of mess in the future; that is, if the court rules in their favor. If the court doesn’t rule in their favor, protecting user privacy will become a lot more difficult for Twitter, and almost impossibly time intensive. There’s definitely a lot at stake here. Hopefully the ruling will be user-friendly.