Twitter to Turn Law-Cannon on Fleet of Spam Cruisers 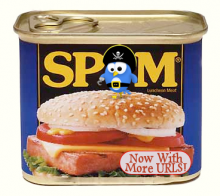 Anyone on Twitter who made the mistake of saying something like “iPad” in a tweet knows that there are spammers out there, and they are legion. For the most part they just fire sketchy links at you, offering a bevy of free goods, and clogging up your mentions page. But no longer, if Twitter has anything to say about it. Although its arsenal of anti-spammer security precautions manage to blast some of the spambots out of the twittersphere, there are some that still get through, so Twitter is breaking out a new super weapon: The shining, golden fist of Law.

“Our engineers continue to combat spammers’ efforts to circumvent our safeguards, and today we’re adding another weapon to our arsenal: the law,” Twitter righteously proclaimed in a blog post on Thursday. Twitter has now let a precision-aimed, multi-payload lawsuit missile fly, directed towards five creators of programs that are responsible for the lion’s share of tweet-chaff present on the network.

“With this suit, we’re going straight to the source. By shutting down tool providers, we will prevent other spammers from having these services at their disposal. Further, we hope the suit acts as a deterrent to other spammers, demonstrating the strength of our commitment to keep them off Twitter.”

While we patiently wait for Twitter’s legal warheads to impact, there’s fighting to be done in the trenches by Twitfintry such as yourselves. By reporting spammers when they pop out of their twox holes to take pot-shots at you, you can help stem the ever-advancing tide of evil-doers. Or at least annoyance-doers.

The fight against spam on Twitter, and elsewhere, is a war that is unlikely to ever end, but hopefully the introduction of high-ordnance law-using can help tip the scales on the Twitter front. In the meantime, anyone know a good free iPad giveaways?

(via PhysOrg, image via genepensiero)