Teacher-Turned-Congressman Grades GOP Letter to House Speaker, Posts It to Tumblr for Your Enjoyment

There are politicians who use Tumblr? This is worse than when the celebrities find our fanfic. 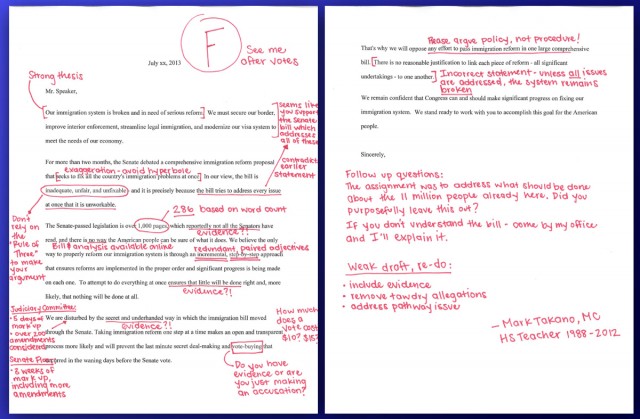 As much as high school sucked for basically everyone, there are some things about the state of the real adult world that could probably be improved by a little more of the discipline that only an overworked teacher can provide. Former high school teacher Representative Mark Takano (D-CA) decided that maybe the Republican-drafted letter about immigration that was circulating around the floor of the House might benefit from some edits and creative criticism, so he graded it and posted the results to his Tumblr. Unsurprisingly, Takano feels the work needs some serious revisions.

The letter in question was one drafted by Republican members of the House to be presented to House Speaker John Boehner (R-OH) after gathering an appropriate number of cosigners. It specifically addresses a proposed immigration bill that, in the writer’s opinion, is “inadequate, unfair, and unforgivable.” If you, like Takano, also balked at improper reliance on the “Rule of Three” in that statement, then congratulations! You’re probably also a high school English teacher. We’re sorry you get paid so little. Credit where it’s due, though, the GOP drafters did use the Oxford comma, as is right and proper.

You can click the above image to see the full-sized version, but in case you’d prefer not to, let’s break down some of the best parts of this grading process, if only because as a site full of English majors, this is pretty much all we’re good for and we get to do it so rarely. Takano not only gives the letter an F, but advises the writer to “see me after votes.” He cites a lack of sufficient evidence, which every English student knows is important to constructing a thesis, at least three times. And after the letter’s conclusion, he says, “The assignment was to address what should be done about the 11 million people already here. Did you purposefully leave this out?” and “If you don’t understand the bill — come by my office and I’ll explain it.”

In case you weren’t already completely enamored with Takano solely on the basis of his particular brand of teacher sass, you should probably also know that he was the first openly gay person to be elected to Congress, as well as one of only 25 Asian Americans in the House of Representatives. He also regularly updates his Tumblr, titled “There Will Be Charts,” with — what else — charts full of the stupid stuff that goes on in the White House. At least he doesn’t have to worry about running out of material.