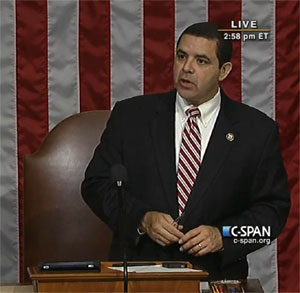 Rules in the House of Representatives forbidding the use of electronic devices on the floor might soon be changed so members of Congress can use their iPads. Because that’s what was preventing them from doing their jobs effectively. Not being able to use their iPads.

An iPad first appeared on the House floor earlier this month by way of Texas Congressman Henry Cuellar. He says he mainly uses it to read news and check emails, but also uses professional apps such as Congress in Your Pocket and another that functions as a teleprompter. But he also vows to keep his device “productive and distraction-free.” (The same way we all vow not to browse the Internet at work. Hi, everyone!)

There are definite benefits to being plugged in on the House floor. For one, members will be able to factcheck instantly, which could change the way debates are run. Steve Frantzich, a U.S. Naval Academy professor and renowned technology and politics expert says:

There will be the ability to have real-time information brought to the floor in a readable, usable format. A member could make a factual statement, and someone with an iPad could say, ‘No, your data is two years old.’ All of a sudden, you have a member being able to one-up someone speaking on the floor.

There will be restrictions, of course. According to House Parliamentarian John Sullivan, members will not be allowed to use iPads for transmitting (no IMing!) and will have to keep it on silent.

But they didn’t say anything about games. Will they catch Nancy Pelosi playing Angry Birds now that she’s been bumped to Minority Leader? Several members of Congress are already on Twitter. Will they Tweet after class about how much they goofed off while debating H.R. 574 and that no one ever sits with Michele Bachmann in the cafeteria? This is adorable. Congress is going to be just like middle school soon. Or … just more like middle school than it already is.