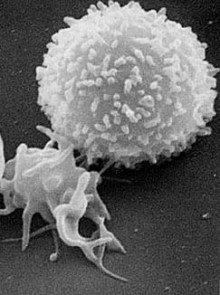 Researchers looking to treat cancer patients without subjecting them to the ravages of chemotherapy have published some promising results in the journal of Science Translational Medicine on “adoptive T-cell therapy.” Using this technique, researchers removed immune system cells from nine melanoma patients. These cells, called T-cells, are the responsible for fighting off disease in the human body. They then “trained” the cells, by exposing them to genetically engineered cells that carried tumor antigens, which signaled the T-cells to attack.

The new, smarter, more experienced cancer-fighting cells were then multiplied and re-introduced to the patient’s body. After two weeks, the cancer in four of the nine patients had stabilized, neither growing nor shrinking. In one patient, the cancer had disappeared entirely and was still cancer-free after two years. Five of the nine patients also responded much better to cancer drug treatments later on.

Though this is only an early study, and will require many more experiments before it can be considered for widespread use, it does bode well for researchers. Especially since previous T-cell training experiments failed when the cells died off when put back in the body. With any luck, future research will be just as promising as this study.

(via Discover, image via Wikipedia)