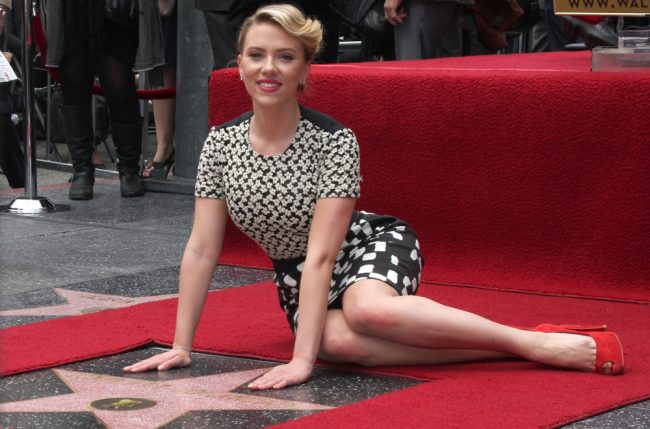 Forbes released its annual list of the world’s top-grossing actors. Scarlett Johansson tops the list, having brought in $1.2 billion in box office returns. To decide these numbers, Forbes looked at global ticket sales of the actors’ films as on December 27th, excluding cameo appearances and animated or other voice-over work. (Meaning, presumably, that number doesn’t even include Sing, which dominated the box office along with Rogue One this month, or The Jungle Book, which brought in nearly another billion dollars.)

Again, these are not the actors’ salaries. This is how much their movies have brought in this year. For contrast, here’s Forbes’ list of 2016’s highest paid actors.

Well, that’s a very different list, isn’t it? Now, the two aren’t 100% comparable. The highest-grossing list covers the calendar year of 2016, while highest-paid covers June 2015 – June 2016. But that means Captain America: Civil War (released May 2016) is included in both. And for the record, Scarlett Johansson made $25 million this year. That’s, obviously, a whole lot of money and hard to complain about, but it’s worth looking at what separates these two lists, and why number one on one of them doesn’t crack the top ten of the other.

Let’s just state the obvious right off the bat, okay? Part of it is, of course, gender-based. The pay disparity in Hollywood has finally broken into the mainstream conversation this year, and it’s no secret that female actors don’t make as much money, in general and on average, as their male costars. Remember the controversy around the American Hustle salary reveals? That’s when Jennifer Lawrence and Amy Adams (and the rest of us) found out how little they were paid compared to Christian Bale and Jeremy Renner. (For what it’s worth, Amy Adams, #5 on that top-grossing list, made $13.5 million this year.)

But there’s another interesting difference in who’s on which list, and that’s the issue of stardom. There’s a question that pops up in internet discussions of Hollywood every so often (and, I would imagine, in conversations in Hollywood, practically every minute) that questions the concept of franchises in a chicken-or-the-egg sort of way. Does a franchise (or a standalone blockbuster, not that those really exist anymore) need a star to make money, or does a franchise make the star? The list seems to prove … both?

Chris Pratt is often the go-to example of the latter, going from television comedy to being basically handed giant action franchises, and yet he didn’t make either list. (He made $26 million last year.) Looking at Rogue One, Felicity Jones wasn’t going to get a superstar’s paycheck even though she was doing a superstar’s job, playing the lead in a Star Wars movie. And the fact that Will Smith can make both the top-grossing list and Forbes’ list of overpaid actors—those whose balance of paycheck vs. box office return don’t work out in the studio’s favor—even further confuses the issue.

Both lists are dominated by action stars, and celebrity cachet is definitely still a big box office draw, but superstar status isn’t a total necessity when it comes to how to draw a crowd. That’s important because that’s the argument used whenever the question of diversity and representation is raised. Why can’t John Cho star in everything? Why can’t we have faith in a female-driven action movie or comedy? We’re constantly told it’s because of box office draw, and the need for an established (read: white male or, apparently, Scarlett Johansson) star. But that’s clearly just not true, at least not as an absolute.

People will see a Star Wars movie whether it stars Felicity Jones or Scarlett Johansson, John Boyega or Chris Pratt. And Ryan Reynolds struggled for a decade to make Deadpool because no one thought we wanted a Ryan Reynolds Deadpool movie WHEN OBVIOUSLY WE REALLY, REALLY DID. We like good movies, and we like diversity! How is that so hard for studios to comprehend?

So back to the original question: What’s the difference between those two lists? Well, I’m sorry if you thought I was going to have the answer to that question. All I can really tell is that the people in charge of making the movies you see seem to think they do have the answers, which pretty much amount to “don’t change anything,” despite these lists demonstrating that their idea of which actors are worth bigger financial investments isn’t very accurate. And that, frankly, isn’t sitting well with audiences anymore.

Really, it’s fine that they don’t know, because there are too many factors involved for them to ever get it right, but that’s why we’d like to see more “risks” (read: diversity). We’re going to see the movies we want to see—and, yes, the movies studios promote the hell out of—and sometimes that’s based on who’s in it, sometimes it’s based on the source material or subject matter, and sometimes it’s because of word of mouth, a great trailer, inexplicable intrigue, or some other intangible reason.

I don’t fault Hollywood for trying to crack the intangible element. But to do so, they’ve spent the length of an entire industry attempting to maintain their status quo. Can we finally, collectively admit that box office draw and existing celebrity paychecks aren’t equal? Look, I love Chris Pratt and Jennifer Lawrence (even as much as I hated Passengers!), but they were also once box office risks. Why are those risks so few, so far between, and—for the most part—as homogenous as studios can possibly bear? If stars are born of franchises as (or more) often as stars make franchises sellable, why do so many of our movies look the same? Can’t those stars then be anyone, look like anyone?

Come on Hollywood, the ball is very clearly in your court here.

(via Forbes, image via Shutterstock)