That Passengers Twist You’ve Heard About Wasn’t a Twist At All, It’s the Entire Premise of the Movie

And yes, it IS awful. 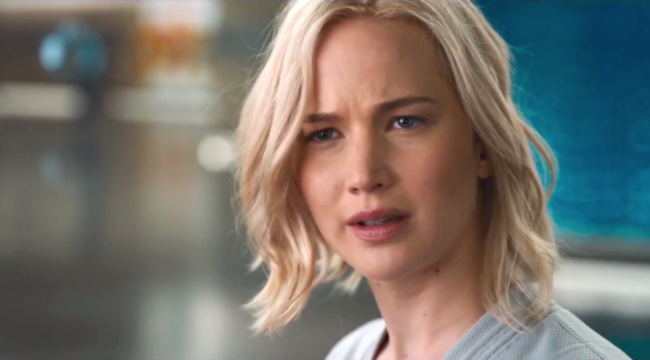 Over the last day or so, you may have been hearing about the terrible twist in the new sci-fi movie Passengers. But, here’s the thing. The plot twist, while just as awful as you’ve heard, isn’t really a plot twist at all—it’s just the plot. Still, turn back now if you don’t want some general spoilers and prefer to go into the movie not knowing anything.

The official synopsis, as well as the trailers—wildly different as they were, some depicting a sort of space mystery conspiracy thriller, and others promising a blockbuster space rom-dram—all told the same basic story: two passengers on a space journey to a new colonized planet (Homestead II) have their suspended animation pods break down 90 years too soon. But that’s not the real story. And again, spoilers for the actual plot of the movie to follow.

Two pods don’t break down early. One does, belonging to Chris Pratt’s character Jim. Then, Jim becomes obsessed with Jennifer Lawrence’s character, Aurora, and takes her out of her cryogenic sleep about a year after his pod failed.

And that’s about a thousand kinds of terrible. It’s also a fascinating ethical tangle that the movie all but ignores. It’s not surprising that the trailers marketed such wildly different movies, because I don’t think this movie had any idea what it was. We have a half hour of quiet comedy (and pain, but mostly comedy), as Chris Pratt spends a year awake alone. His only friend is Michael Sheen’s spectacular robot bartender. Then, it’s another half hour before Aurora finds out why he woke her up, and in between, we do have a charming love story between the pair. But the awful act he’s inflicted on her, which she compares to being tantamount to murder, isn’t much of an issue for the majority of the movie.

The film’s writer, Jon Spaihts, talked to i09 about the way Jim’s incredibly selfish act has been received. He clearly thought he was telling a different story:

“It’s not as if it’s an accidental oversight of the film, where we, through some cultural blindness, have failed to see the appalling nature of our hero’s actions. It is the subject of the film. And I think that making a movie that leaves people room to argue about what they would have done, what they could have forgiven, what they can understand or fail to understand, I think that’s great. I think that’s good storytelling. What I don’t believe the movie does is endorse or exonerate anyone. The movie looks, evenhandedly, at the dilemma everybody was in. I think putting good people in impossible circumstances makes for fascinating storytelling.”

The director, Morten Tyldum, also defended not Jim’s choices, but the way in which they were depicted.

“And I wanted it to be a very entertaining movie that is not shying away from these big questions. And I think that most of us, if we had the choice, would have done what Chris’s character do. We’re lying to ourselves if we’re saying that we won’t.”

Again, those are complicated ethical questions to tackle in a movie. Now, if only the movie had actually tackled them.

Sure, it’s easy for us audience members to sit back and say how we would have done things differently, but something, anything, maybe everything needed to be different here. I’m not even saying that it would be a better movie if they’d both actually woken up together as the synopsis and trailers led us to believe. Jim’s choice doesn’t need to be left out of the movie. IT JUST SHOULD HAVE BEEN THE MOVIE. We should be asking those questions: what we would have done in Jim’s situation? And what would we do in Aurora’s?

If the movie’s creative team had effectively convinced us that Jim was desperate and lonely enough to ruin another person’s life (they didn’t), or that he was right in knowing he and Aurora have a real connection (despite the fact that his fixation with her was born out of nothing but maybe a dossier and watching a couple videos of her speaking), then we could be having a conversation about whether his actions were understandable, albeit not justifiable.

Alternately, they could have made him a stronger anti-hero, and leaned into the fact that he didn’t even know Aurora, he just projected soulmate-level love onto a sleeping stranger–like While You Were Sleeping, but way more ethically charged. Hell, her name is Aurora Lane, for crying out loud! Like literally the road to light, to a new dawn? How much clearer can you be that he’s projecting the role of one true love and savior onto this unwilling participant? That’s an interesting story here that never really gets told.

Why did Jim do what he did? What would we have done? How can you empathize with a man who places his own fabricated desires over the life of a woman, denying her any autonomy or basic choice?

But the movie misses out on the opportunity to ask any of these questions by glossing over Jim’s horrific act. They never, not even through the mess of a third act where they seem to forget what story they’re even trying to tell at all, give Jim’s choice the full weight of its very real horror. It’s kidnapping, and it’s essentially murder, and neither before nor after Aurora finds out what he’s done is the audience or even Jim himself really forced to confront, let alone honestly atone, for that choice. If he (and we) had, that could have been one heck of an interesting movie.