The Muppets are judging you, the Today Show. 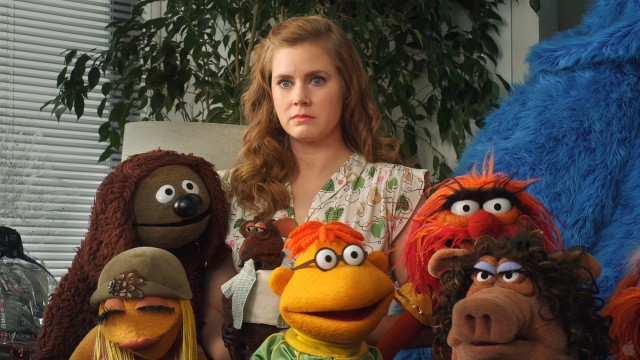 And here’s why she’s totally within her rights to refuse to talk about it and The Today Show were being jerks.

In order to explain this, I’ll have to explain one of the revelations found in leaked information from the Sony hack. Among the various salary and financial info open to the public, was the specific salaries of a number of executives and big name stars. It might not surprise you to learn that these numbers showed a significant pay gap between male and female executives at the company. It also might not surprise you to learn the pay gap extended to male and female co-stars in Sony’s most successful and lauded recent films. And that’s where Amy Adams comes in: it was revealed that there was a significant pay gap between the male stars of 2013’s American Hustle (Bradley Cooper and Christian Bale) and the female stars (Adams and Jennifer Lawrence).

Adams was slated to appear live on Today this morning to promote her latest starring role in Tim Burton’s Big Eyes, and was even shown in a quick live promo clip, but according to Deadline, her segment was bounced after she refused to agree to answer questions about the Sony hack in the four-minute interview.

So far Deadline hasn’t heard from Adams or anyone directly associated with her, but the Weinstein Company, who are backing Big Eyes, have said they stand with Adams’ refusal to be put on the spot in regards to a scandal she had nothing to do with. Today, on the other hand, insists that due to the program’s commitment journalistic integrity, guests are not allowed to “dictate restrictions on interviews,” and so Adams’ interview was cancelled.

And there might be a place to get into a discussion of journalistic ethics and the value of acting on principle here… if this morning the show hadn’t also played a recent interview with Cooper, Adams’ American Hustle co-star, about his upcoming film American Sniper, in which they asked him not a single question about the Sony hack. It stands to reason that if they’re looking for statements on the pay gap evident in American Hustle‘s financial structure, he might be a good person to ask.

But nah, to borrow a phrase, it’s all about ethics in journalism.