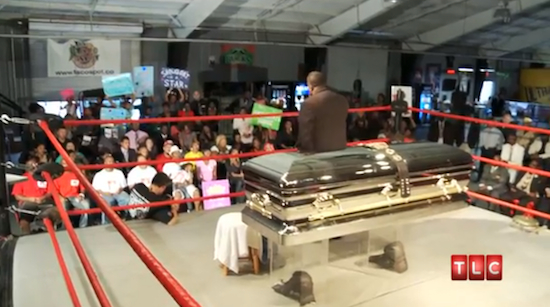 What happened to you TLC? Years ago, you used to be all about expanding the craniums of your audience, and now you spend your days doing the exact opposite by rotting our minds with senseless reality TV garbage. In yet another instance of the network showing it has no sense of personal dignity, which was lost the moment they started airing Here Comes Honey Boo Boo,TLC is airing Best Funeral Ever: A special/backdoor pilot about the Golden Gates Funeral Home taking what is typically a solemn affair and transforming it into a gaudy, irreverent spectacle that will most likely draw in millions of viewers by their noses. Who are we kidding? We’re probably going to be right there watching it with everybody else.

To be honest, we have absolutely no idea who “Disco” Danny Williams is, but with a colorful name like that, you can’t help but miss the guy already. Here’s hoping that Danny — who ever he is — boogied down past those pearly gates and at last found eternal peace on heaven’s dance floor, where the party goes on into infinity. And that, my friends, is a place where we would all like to be right now.