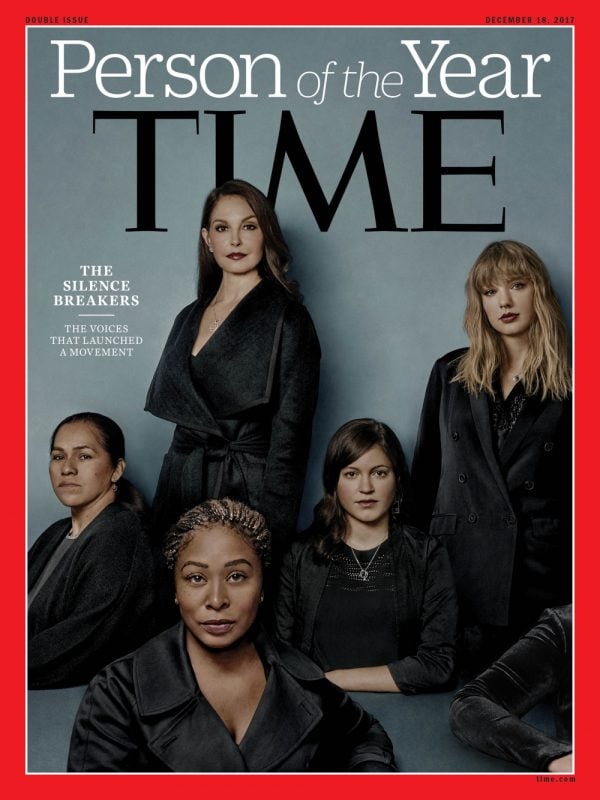 TIME has named their 2017 person of the year, and it’s the powerful voices of #MeToo. This year, women like Ashely Judd bravely spoke out against prominent men like Harvey Weinstein and started a movement that emboldened and inspired others to speak out against their respective Weinsteins. Speaking out is difficult, and there are even more difficulties that accompany being the first one to  break the silence. This title could not be more deserved.

On the cover are Ashley Judd, Susan Fowler, Adama Iwu, Taylor Swift, and Isabel Pascual (a strawberry picker whose name was changed to protect her identity), by photographers Billy and Hells. Editor-in-Chief Edward Felsenthal writes:

“The galvanizing actions of the women on our cover…along with those of hundreds of others, and of many men as well, have unleashed one of the highest-velocity shifts in our culture since the 1960s. Social media acted as a powerful accelerant; the hashtag #MeToo has now been used millions of times in at least 85 countries…. The roots of TIME’s annual franchise—singling out the person or persons who most influenced the events of the year—lie in the so-called great man theory of history, a phrasing that sounds particularly anachronistic at this moment. But the idea that influential, inspirational individuals shape the world could not be more apt this year…. For giving voice to open secrets, for moving whisper networks onto social networks, for pushing us all to stop accepting the unacceptable, The Silence Breakers are the 2017 Person of the Year.”

The cover story goes beyond the Hollywood revelations to illustrate how this problem exists in all industries. It also rightfully remembers and honors the women who spoke out before, like Anita Hill, who testified against Supreme Court Justice Clarence Thomas in 1991 and brought “national attention to the issue,” and the nearly 50 women who accused Bill Cosby of assault, only to have their case end in a mistrial. I truly recommend reading the entire article, which brought tears to my eyes over how resilient and courageous these individuals have been, and how determined they continue to be in empowering survivors.

“The reckoning appears to have sprung up overnight. But it has actually been simmering for years, decades, centuries. Women have had it with bosses and coworkers who not only cross boundaries but don’t even seem to know that boundaries exist…. These silence breakers have started a revolution of refusal, gathering strength by the day, and in the past two months alone, their collective anger has spurred immediate and shocking results: nearly every day, CEOs have been fired, moguls toppled, icons disgraced. In some cases, criminal charges have been brought….Emboldened by Judd, Rose McGowan and a host of other prominent accusers, women everywhere have begun to speak out about the inappropriate, abusive and in some cases illegal behavior they’ve faced.”

TIME interviewed “dozens of people representing at least as many industries, all of whom had summoned extraordinary personal courage to speak out about sexual harassment at their jobs.” This includes former Uber engineer Susan Fowler, journalist Megyn Kelly, Labour Party activist Bex Bailey, actor Terry Crews, dishwasher Sandra Pezqueda, and more. In telling their stories, these interviewees make visible the systemic nature of this violence, as survivors of harassment and assault then must deal with victim-blaming, silencing, and a lack of accountability. They shared similar experiences of shame, fear, and backlash to different extents. For instance, Crystal Washington, who filed a harassment suit with six other female employees from the Plaza, cannot afford to leave her job:

Those who are often most vulnerable in society—immigrants, people of color, people with disabilities, low-income workers and LGBTQ people—described many types of dread. If they raised their voices, would they be fired? Would their communities turn against them? Would they be killed? According to a 2015 survey by the National Center for Transgender Equality, 47% of transgender people report being sexually assaulted at some point in their lives, both in and out of the workplace.

The shortlist for TIME’s yearly title was announced recently, and also included Dreamers, Colin Kaepernick, Patty Jenkins, and other figures that left their marks this year. There’s a special joy to TIME choosing #MeToo, as the announcement arrives after Trump bragged about how he “took a pass” on the title, which was followed by the magazine responding that “The President is incorrect about how we choose Person of the Year. TIME does not comment on our choice until publication, which is December 6.”

Trump’s name wasn’t left out of the issue, however, as runner-up. The feature also specifically addresses the Access Hollywood tape in which the President brags about sexual assault, writing, “That Donald Trump could express himself that way and still be elected President is part of what stoked the rage that fueled the Women’s March the day after his Inauguration.” It’s a known fact that Trump cares quite a bit about having his name in TIME. Do you think he’ll be delighted at the news?

Summer Zervos, a former contestant on The Apprentice, was one of roughly 20 women to accuse the President of sexual harassment. She filed a defamation suit against Trump days before his Inauguration after he disputed her claims by calling her a liar. A New York judge is expected to decide soon if the President is immune to civil suits while in office. No matter the outcome, the allegations added fuel to a growing fire.

TIME notes that our current moment of predators being named should be the start to more change. “We’re still at the bomb-throwing point of this revolution, a reactive stage at which nuance can go into hiding”, it states. “But while anger can start a revolution, in its most raw and feral form it can’t negotiate the more delicate dance steps needed for true social change. Private conversations, which can’t be legislated or enforced, are essential.”

It is a reminder that while we celebrate predators being held accountable, the fight is far from over, until survivors are truly believed and rape culture becomes a thing of the past. We must continue, so this year marks a critical turning point—not just a 2017 phenomenon.