"When Did You Meet YOUR Harvey Weinstein?" Twitter Replies | The Mary Sue

“When Did You Meet YOUR Harvey Weinstein?” Twitter Replies Are Enraging and Show That Sexual Harassment Is Everywhere 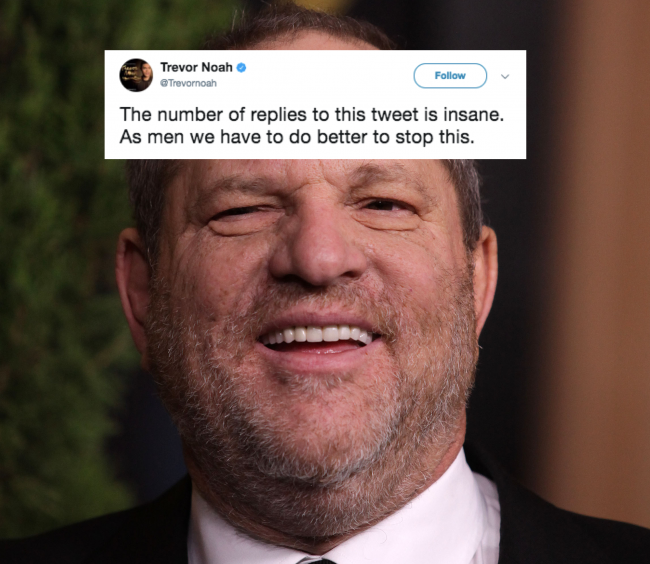 The writer Anne T. Donahue put out the call on Twitter for people to share stories of meeting “their” first Harvey Weinstein—meaning a person who abuses their position of power in order to sexually harass—and the replies climbed into the thousands. Way, way, way too many women have met a Weinstein.

Sexual harassment is pervasive in every industry, on every street corner, and, unfortunately, at many ages; some of the stories here concern high school students and even young children. While men can and do experience sexual harassment, the commonality of this experience among women is striking and rage-inducing.

Every woman I know—every single one—has dealt with street harassment, which means unwanted comments and approaches, often multiple times a day, always accompanied by the fear that these unasked-for encounters could go wrong if you don’t smile and bear it. And trans women friends have reported that they become subject to this harassing behavior during and after transitioning.

I think it’s bc we know their hurt feelings can turn into our broken bodies very easily. It’s deescalation.

Many of us have had casual incidents of sexual harassment as part of our daily lives for so long that they barely register anymore; some of the women on Twitter started recalling more and more experiences as they read through others’ stories. And many have been subjected to incidents that are better defined as sexual assault.

I first saw Donahue’s query when she was retweeted by Daily Show host Trevor Noah:

The number of replies to this tweet is insane. As men we have to do better to stop this. https://t.co/bpgZs4P2FL

It’s good of Noah to promote this idea: men really do need to do better to stop this. What Noah might not realize is the thousands of replies here constitute only the tiniest of fractions of the harassed whole. There are almost four billion women alive on planet Earth; I’m pretty sure almost all of them has a story they could add to Donahue’s chain.

When did you meet YOUR Harvey Weinstein? I’ll go first: I was a 17-yr-old co-op student and he insisted on massaging my shoulders as I typed

Here’s just a small sampling of the replies Donahue received.

Grabby driving instructor who would tell girls they weren’t going to get their license unless they kissed him. We all warned one another.

At 16, my 50+ history teacher called me into his classroom (alone) and breathily told me I looked “stunning, like Seven of Nine.”

In college working on an indie film. I was walking by a producer and he said “I can’t take it anymore” and shoved his hand down my pants.

I ALSO had a teacher who massaged female students’ shoulders while we typed. This was fifth grade. What is it with the shoulder massages?!

I’m so weird about being touched now. Crazy that it’s common for lots of u. Even crazier that I somehow thought it was my fault.

I was born to my Harvey Weinstein

I was 6, while walking to school, a block from my house, a man flashed me and my friend from inside his house and waved for us to come in.

First law firm out of college. Not 1 but 3 different attorneys attempted. After first, I complained to HR who hinted I had led them on.

7th grade. was dropping off a proj. to my teacher before school, wearing a long skirt. he said “pretty skirt. don’t you have a shorter one?”

And on and on and on and on and on. What’s incredibly important about threads like this is that they provide a place of shared solidarity and strength, where mutual sympathy instead of recrimination can be found. People like to ask why victims often stay silent about sexual harassment and assault: it’s because so often they’re not believed, or they’re told that it was their fault in some way, and the shame that should belong to the perpetrators is passed to their victims. Thus we keep things to ourselves. After all, society trains us to believe that if we hadn’t been wearing that skirt, or hadn’t been drinking, or hadn’t smiled, this wouldn’t have happened—it’s never that these men shouldn’t have initiated contact in the first place.

Even knowing how frequently this kind of harassment occurs, it’s moving—and infuriating—to see it laid bare like this.

Exactly. I can dismiss all the creepiness in my own life, but knowing exactly how common this is? That’s goddamn infuriating.

Good men are not to blame for the actions of the bad, but lately a lot of my favorite male allies have been admitting that they haven’t done enough: haven’t called out their friends’ behavior, haven’t shut down a sexist conversation, haven’t interceded when they see a woman harassed on the street or at work. It’s always easier to look away, but that’s not okay. Those same allies have said—echoing Trevor Noah’s astonishment—that they didn’t realize this was so frequent and widespread of a problem. Well, it is. And from our end, recent events have shown that women aren’t going to keep silent anymore. But we shouldn’t have to bear the brunt of pushing for change in an area that is already being unwillingly forced upon us.

What a thread – terrible and poignant.