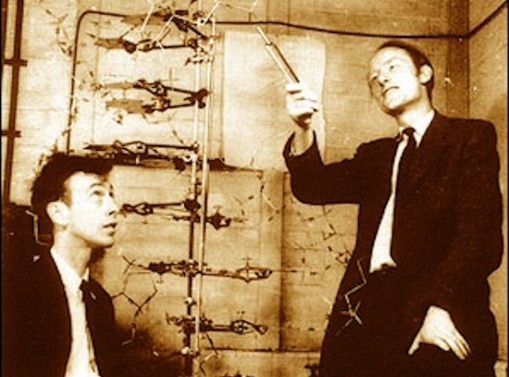 60 years ago today, one of the most important discoveries in the history of modern science was announced, as is right and proper, at a bar. On February 28, 1953 in the Eagle Pub, James Watson and Francis Crick first spoke publicly about their discovery of the structure of the most fundamental building block of life, deoxyribonucleic acid — or DNA if that’s too much of a mouthful.

The discovery of DNA’s double-helix structure was the culmination of years of research by Watson, Crick, and many others — most notably Rosalind Franklin, the researcher whose x-ray crystallography images proved to be the turning point in Watson and Crick’s work, but who was never properly acknowledged by the pair. When Watson and Crick won the Nobel Prize for their discovery, Franklin wouldn’t even be mentioned, much less share in the notoriety or cash that came with the prize.

Still, even if the famed pair didn’t give credit where credit was due, we should, and there’s no question that Watson and Crick were an intensely hard working, talented pair of scientists whose contributions reshaped biology and arguably launched modern life sciences as we know them today. The importance of revealing the secrets of DNA’s structure are pretty hard to overstate, so, yeah — respect should be paid.

Especially considering that according to Watson’s memoir, the first public mention of the discovery came when Crick interrupted lunch at The Eagle pub — then a popular watering hole for scientists at Cambridge University‘s nearby Cavendish Labs — to announce that he and Watson had “discovered the secret of life.” Which if you’re going to interrupt everyone’s lunch at a bar is at least a pretty good reason, though history is silent on whether Crick did the classy thing and got the next round for the many bar patrons to whom the secret of life had already been revealed to be “a good sandwich and a strong beer, consumed in relative peace and quiet.”

That announcement may actually be one of the best lesson’s modern scientists can take from the DNA-discovering duo. Just imagine how much more accessible research would be if every initial publication of a scholarly paper had to be preceded by the lead author shouting about the discovery in a bar.