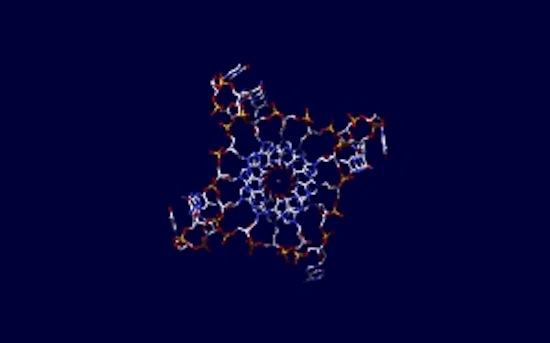 A team of researchers at Cambridge University have spotted the first instances of DNA with four helices present inside human cells. The Cambridge team hopes their findings could have implications for treating cancer, but the discovery more broadly suggests that we still may have a lot to learn about the basic structure of DNA and the shapes it can potentially take.

The four-stranded DNA units are known as g-quadruplexes, as they are created by 4 bases of the DNA-forming molecule guanine forming a square DNA helix. The quadruple helix structures appeared to come and go when studied in human chromosomes, and early evidence suggests they are more commonly seen when a cell is just about to divide. The structures have been understood to exist for some time and researchers have had their suspicions that the structures formed in human cells, but this is the first strong evidence of the four-helix formation present within a cell.

Now, all that’s left is to figure out what this strange DNA is doing there, a project that will likely only take several researchers’ entire careers.

To find the g-quadruplexes, researchers went looking in cancer cells, and specifically in the telomeres — guanine-packed DNA sequences that act as caps and tell DNA when to stop dividing — and other areas of cancer cell DNA that seemed oddly rich in guanine. They then exposed those cells to pyridostatin, a chemical known to trap quadruple-helix DNA as it is forming, finding many examples of the doubled up DNA.

Researchers suspect that abnormalities in the telomeres of cancer cells may be one of the reasons those cells divide so quickly and dangerously, and the Cambridge study, which appeared this weekend in the journal Nature Chemistry, shows that one of those abnormalities could be the presence of quadruple helix DNA. The next step will be to go looking for g-quadruplexes in healthy cells in an attempt to determine if they are abnormalities unique to cancerous cells, or throwbacks to earlier stages of development — such as embryonic states — that are being reactivated later in life with dangerous consequences.