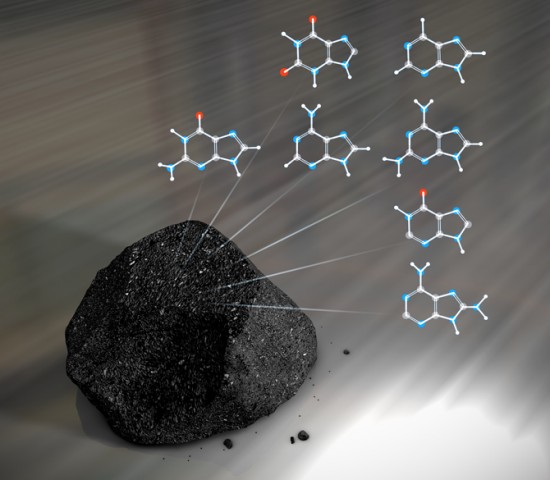 NASA researchers studying meteorites have found that they contain several of the components needed to make DNA on Earth. The discovery provides support for the idea that the building blocks for DNA were likely created in space, and carried to Earth on objects, like meteorites, that crashed into the planet’s surface. According to the theory, the ready-made DNA parts could have then assembled under Earth’s early conditions to create the first DNA.

The researchers, from NASA’s Goddard Space Flight Center, found adenine and guanine — two of the nucleobases needed to make DNA (the other two are thymine and cytosine, which were not found) — on meteorite samples. Additionally, the samples showed the presence of three molecules that are similar to nucleobases, but do not have a biological role on Earth: Purine, 2.6-diaminopurine, and 6.8-diaminopurine. Hypoxanthine and xanthine, compounds used in biological processes, but not DNA, were also found. What is particularly significant about the new research is that the scientists were able to confirm that the biological parts were created in space and carried to Earth.

Opponents of the idea that the components of DNA come from space typically point to contamination of samples with organic compounds as a reason why this theory isn’t viable. Samples can become contaminated simply from being handled or coming into contact with these compounds, which isn’t hard to do on Earth since DNA makes up all living things. This is the first research to effectively prove that there was no contamination and these compounds come from space.

The researchers proved this three ways. To start off their analysis, the samples underwent an extraction process. Each sample was treated with a solution of formic acid, and then run through a liquid chromatograph, which separates out compounds from a mixture. The samples were then studied with a mass spectrometer, to determine the chemical structure of the compounds that were found.

From this analysis, the nucelobases adenine and guanine were found. DNA looks like a spiral ladder, with rungs joining two sides as the strands twist, the double helix. These nucleobases make up parts of the rungs, and are an important part of the code that tells the internal machinery of cells which proteins to create. This analysis also revealed the molecules 2.6-diaminopurine and 6.8-diaminopurine, these molecules are rarely used elsewhere in biology, and are similar to nucelobases. These molecules are called nucleobase analogs.

The nucleobase analogs are the first piece of evidence showing that the compounds really did come from space and not Earthly contamination. Michael Callahan, a researcher at Goddard who led the study, said in a NASA press release:

“You would not expect to see these nucleobase analogs if contamination from terrestrial life was the source, because they’re not used in biology, aside from one report of 2,6-diaminopurine occurring in a virus (cyanophage S-2L).”

According to Callahan, the nucleobase analogs were most likely produced by the meteorite as if it were acting like a chemical factory. If the meteorite was creating the material needed to make life, it would be expected that many variants of nucleobases, not just the ones that ended up having a biological use, would be generated due to the variety of chemicals and conditions in each sample.

The second thing that ruled out the possibility of terrestrial contamination was how much of these molecules were found, and where. In addition to the meteorite samples, the researchers also studied a 21.4 pound chunk of ice from the area of Antarctica where most of the meteorites were recovered. The amounts of the two nucleobases, and the hypoxanthine and xanthine, were found in low concentrations in the ice at only a few parts per trillion. In the meteorites, they were found at concentrations of several parts per billion. If the DNA building blocks had come from Earth and contaminated the samples, their concentration would have been much higher in the ice they had been in contact with.

The third piece of evidence that supports the idea that the DNA components originated in space is that the researchers found the nucleobases, and the hypoxanthine and xanthine, were able to be produced by a completely non-biological reaction. Callahan explains:

“In the lab, an identical suite of nucleobases and nucleobase analogs were generated in non-biological chemical reactions containing hydrogen cyanide, ammonia, and water. This provides a plausible mechanism for their synthesis in the parent bodies, and supports the notion that they are extraterrestrial.”

This research is the strongest to date that supports the theory that the components of DNA necessary to create life on Earth were generated in space and transported to Earth. The research was published in the Proceedings of the National Academy of Sciences.