You could say they're not hAPPy. 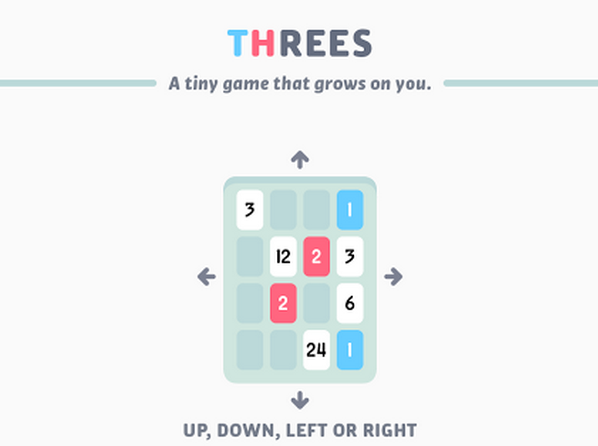 You’ve probably heard of the addictive game 2048, which has recently taken the Internet by storm and is ruining everyone’s productivity. You’ve probably also heard of 1024, the game upon which 2048 is based. But have you heard of Threes, the game that 1024 is based on? Probably not, and Three‘s developers kind of hate that.

Asher Vollmer and Greg Wohlwend, the people behind Threes, took to their website to explain their problems with 2048’s sudden popularity. Specifically, they’re less upset with the proliferation of clones (they cite Numberwang as their favorite, though I’m gonna speak for all of the Geekosystem team and say that ours is the Doctor Who version) than they are with how quickly 2048 arrived to pull on their coattails and hog all the glory.

We want to celebrate iteration on our ideas and ideas in general. It’s great. 2048 is a simpler, easier form of Threes that is worth investigation, but piling on top of us right when the majority of Threes players haven’t had time to understand all we’ve done with our game’s system and why we took 14 months to make it, well… that makes us sad.

It’s complicated and hard to express these conflicting feelings but hopefully this is a start. We are so happy with Threes and how it has done and all the response. Seriously. And even writing this feels like we’re whining about some sour grapes that we have no business feeling sour about. Like it’s not ok to feel the way we do some of the time. But we do.

We do believe imitation is the greatest form of flattery, but ideally the imitation happens after we’ve had time to descend slowly from the peak — not the moment we plant the flag.To put it another way, “Imagine Tetris was released and then less than a month later (instead of years) Dr. Mario was released. Dr. Mario is a pretty great game by the way, so the comparison is a bit weird here. Hopefully you get the sentiment.”

In order to demonstrate just how long a process creating the game was for these developers, they’ve published over 45,000words worth of planning material on their website, including design illustrations, texts and emails between the designers, and a lot of minor inside-baseball kind of details outlining the 14-month journey of this game.

So if you’ve ever wondered just what goes into creating a successful app (because despite the clones, Threes is still doing fairly well for itself), head on over and check that out. It’ll probably make you want to fork over the $1.99 to buy the app out of sheer awe — though, if you’re used to 2048, be warned: Threes is much, much harder.

(via Polygon and Threes)