How Rocksteady Built Their Own Batmobile for Batman: Arkham Knight

Sometimes you feel like a Batman; sometimes you don't—and those times must be eliminated. 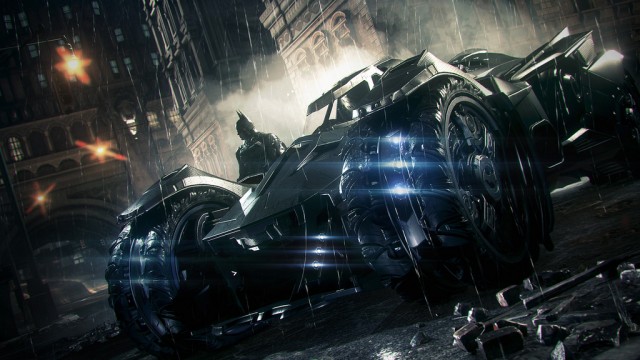 How do you build your own Batmobile when you don’t have Bruce Wayne or Morgan Freeman around to take care of the details for you? That was the difficult task that Rocksteady had to take on without any billionaire playboy resources while creating Arkham Knight, and so far, it looks like they nailed it.

I’ve always said that working on a Batman game is a huge privilege for us. Even though we have been working on Batman for over seven years, we’ve never lost sight of the fact that we are the current custodians of a very special universe.

So it was with great excitement, and not a small amount of trepidation, that we decided to add the fully playable Batmobile into the Arkhamverse, knowing that it would disrupt all of our existing systems and bring with it a huge amount of pressure to deliver on expectations.

That’s Sefton Hill, Game Director at Rocksteady Studios, talking about how the team approaches important elements, like the Batmobile, of a very important fictional universe. A Batmobile is certainly a big change to the Arkham Bat-verse. While Arkham Asylum generally took place in enclosed areas, Arkham City took things a step further with its open world, glide-and-grapple-to-get-around feel.

Now, Arkham Knight is going to have you ripping through the streets of Gotham in your very own Batmobile, which is an experience that will blow fans away if it’s done right, but if it feels off or unsatisfying, it could be incredibly damaging to what should be a great game.

So, what did they do aside from design a Batmobile with a kickass look that draws inspiration from the Nolan movies while fitting a little better into a more comic-inspired universe with some flashy details? When adding the car into the game as a game mechanic, they made sure it was unstoppable, so that you wouldn’t be bogged down by annoying crashes on the incredibly detailed world, and they made it easily accessible by allowing the player to call it at will and eject out of it directly into a glide.

According to Hill, the level of detail in Arkham Knight‘s open world is so high that they were concerned that the player would constantly get hung up on pieces of debris in the road and other small objects littering the streets, so they made the tank-like Batmobile smash through pretty much anything in its way. Apparently, one of the reasons Arkham Knight benefits from the jump to newer consoles is its large, destructible world that older hardware just couldn’t have handled.

All of that contributes to the feeling of being Batman, which is what makes the Arkham games so much fun. Hill says countless development hours have been lost just by developers playing around with ejecting out of the Batmobile into a glide and using the car’s momentum, which translates realistically into your glide, to soar over the city and explore.

I remember spending a lot of time in the old Spider-Man 2 game (which gamers may remember as the first game to really allow you to swing like Spider-Man) just swinging around the city and enjoying feeling that I really was Spider-Man for the first time in a video game, so I can imagine just how fun it will be to explore the city with the help of a Batmobile that never makes you feel bogged down by gameplay technicalities.

For more on what should be the perfect end to an amazing trilogy of Batman games, here’s an interview with Rocksteady’s Dax Gin from GDC 2014 posted today on the PlayStation YouTube channel, and you can also read Hill’s full post on the PlayStation blog that’s brimming with screenshots and insight into the game.