Things We Saw Today: Trump’s Speech to the Boy Scouts Crossed the Line, Then Set the Line on Fire

Then he danced, badly, across the burning line. 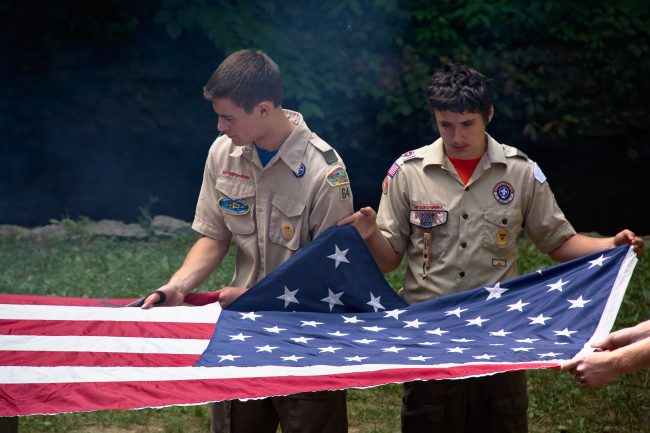 By now you’ve probably heard that Donald Trump addressed a gathering of thousands of young Boy Scouts and ranted at them about Hillary Clinton, Barack Obama, the “fake news” media, the size of his electoral victory, and cocktail parties with real estate developers. It was a terrifying mess.

(In terms of setting fires, I’m absolutely positive Trump did not demonstrate the skills and protocols necessary to earn even the Scouts’ temporary Firem’n Chit badge. He just threw down some gasoline.)

Every time I think Trump can no longer do anything to surprise me, I am quickly proven incorrect. You might think that a massed collection of Boy Scouts at their traditional, beloved Jamboree event might be the one spot where Donald Trump could choose to not act unhinged and attack his perceived “enemies.” Maybe just set that one, single, solitary example for the kids.

But you would be wrong. Trump, who seemed animated by the size of the crowd of captive Scouts who didn’t have a choice in seeing his speech, was in true Trump form, telling this collection of children about the “fake news” media, leading them in choruses of boos and shouts, and telling rambling, disturbing tales about his rich friends’ adventures. The speech defied belief and my ability to describe it. I’m so disgusted I’m struggling to write more about this event that is certain to go down in history, so here’re a few takes:

This man has three sons. Three. But the most relatable story he could think to tell a room full of Boy Scouts is about a real estate mogul. https://t.co/Ky0zOOSbry

I don’t think I’ll forget that Boy Scouts speech. The President of the United States is indoctrinating children into hatred.

There was a conservative freakout in Obama’s first year over a video message telling kids to study hard and be good https://t.co/cqvbPUQaU2

Never forget that Barack Obama was an actual Boy Scout, and Donald Trump, never a Boy Scout, led the Scouts to boo the former President and Obamacare. Pete Souza, former White House photographer extraordinaire and most beautiful troll in the world, had this to post:

I can assure you, POTUS was not telling this Cub Scout and the Boy Scouts who followed about his electoral college victory.

And read this whole, genius thread:

I’ve got a few words to offer about what Trump did at the National Jamboree today, but first let me establish some bona fides…

I’m both sorry and also excited for future historians who have to write about Donald Trump’s mostly incoherent, hugely inappropriate address to the Boy Scouts of America that drew comparisons to indoctrinating Hilter Youth. Have fun, historians!

Bzz, bzz, so what you spot while flying overhead today, honeybees?