It's our first monster-of-the-week with a side of feels. 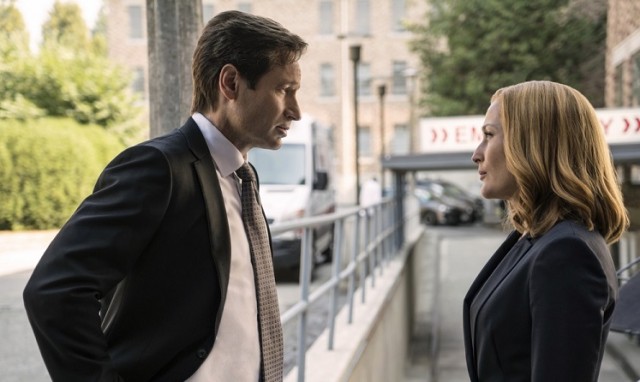 I was left with mixed emotions after Sunday night’s premiere of The X-Files; we were given a mythology-heavy episode in “My Struggle” that felt a little disjointed and unevenly paced. With last night’s episode, “Founder’s Mutation”, Mulder and Scully are definitely not wasting any time getting back into the swing of things–and the show feels like it’s starting to find its groove again.

I must have momentarily blacked out at the tail end of “My Struggle”, when it was established in a mere line of dialogue uttered by the Cigarette Smoking Man that the X-Files had been reopened. (Or is it re-re-reopened at this point?) Therefore, after recovering from a cold open that hearkened back to the gory and disturbing X-Files seasons of yore, it took me a few minutes to figure out why AD Skinner was referring to Mulder and Scully as agents again. I have to wonder, though, how easy it may or may not have been for the FBI to reinstate them. Clearly no one else is really jumping at the opportunity to pursue any new X-File cases.

“Founder’s Mutation” had been touted as a monster-of-the-week episode, so what surprised me the most about it was how James Wong, writer and director of the episode (as well as many great X-Files eps of early seasons), used a seemingly standalone plot as a tie-in to one of the biggest mytharcs of the series. While Mulder and Scully work this case, we finally get some answers as to how they’ve dealt with the fact that they have a son together. Granted, it was a son they made the decision to give up for adoption, sparing him from a childhood that would have been rife with dangerous enemies–but up until this point, the original show had mostly tended to focus on how Scully was coping with her impossible choice. “Founder’s Mutation” finally, finally allows us to see how Mulder has been affected by being separated from William–and it turns out he’s not handling it any better than Scully is.

The episode uses a pair of juxtaposing scenes to give us a glimpse into Mulder and Scully’s individual visions of how their lives could have been different if they had kept William–but it also reveals their worst fears. For Mulder, the nightmare of William’s abduction is what keeps him up at night; for Scully, it’s the possibility that William’s seemingly miraculous conception was a result of the alien DNA she now carries within her, contributing to some transformative side effects. The very last scene of the episode, which lingers on Mulder as he gazes at a photo of baby William–his only photo of his son, presumably (and identical to the one Scully has)–seems to imply that this may be a subplot that will be revisited at some point before the miniseries is over.

The case they work together to figure out, about a doctor conducting controversial research on children suffering from genetic conditions, could have potentially only served as a backdrop to Mulder and Scully’s inner angst, but it’s entertaining and captivating enough that the two storylines find a way to intertwine seamlessly, complementing one another to form an entirely enjoyable episode. References to Edward Snowden, Obamacare and Google feel more like a subtle wink at the audience, like The X-Files poking fun at itself after a long hiatus. And the show is willing to acknowledge just enough when it matters–while investigating the case, Mulder encounters Gupta, a man that the victim was in a secret relationship with, but the episode doesn’t spend time focusing on anyone’s sexuality (aside from a mixed signal between Mulder and Gupta which is clearly played for laughs). The lack of emphasis given is refreshing, and a nice change from some past episodes that may not have handled the issue of a character’s sexuality as smoothly.

Having watched the first two episodes of The X-Files in as many nights now, I have to say I’m coming down on the side of “Founder’s Mutation” as my favorite one so far. Of course, given that we’ve got four more to go there’s a chance for that to change–but there’s not a lot I can point to as a criticism, aside from the occasional body horror scenes that had me covering my eyes. (Seriously, though. This isn’t an episode for the easily squeamish.) There was a lot happening in this episode, plot-wise, but it never seemed to drag. If anything, there were times I caught myself looking at the clock in surprise over how much time still remained.

Actually, I do have one criticism. I was sad when it was over.