The Mary Sue got an email yesterday from Playboy. Not the kind of mail we’ve come to expect but it was about The Walking Dead so we gave it a look. Turns out, writer Robert Kirkman and artist Charlie Adlard are releasing an origin story for one of the comic’s most famous characters – Michonne – exclusively in Playboy today. We find this slightly odd. Here’s why.

Ok, so. Fans of the Image Comic series The Walking Dead, and who also watch the television show on AMC, are highly anticipating the arrival of Michonne. Although we have yet to hear that she’s been cast, we’re assuming she’ll show up next season (or, crossing fingers, in the finale). The character is a quiet, yet extremely talented zombie killer. The survivors certainly don’t know what to make of her at first but she quickly becomes a huge asset to the group. But along the way, Michonne runs into trouble she can’t fight her way out of. She’s captured by the antagonist in the series, The Governor, and sexually assaulted in the most brutal and disgusting ways.

And this is why I feel putting the story of Michonne in Playboy is problematic.

I don’t find Playboy offensive, I think they do what they do tastefully and also provide interesting articles. (Although some people do find it offensive and misogynistic and have every right to think so.) Yes, ha ha, that’s the old joke. “I read it for the articles.” But it’s true, Playboy has a long history of think pieces as well as publishing bits of novels and other literary work in its pages. Hugh Hefner himself has a history with comic books so it’s not totally bizarre to me that they would feature a comic in the magazine. The problem I have is that they chose this character to feature.

Publishing the origin story of a character who’s been the victim of sexual assault in the pages of a magazine who’s purpose is to showcase the bodies of woman is concerning to say the least. It doesn’t match up with what we know about the character and it just rubs me the wrong way. Not to mention, this is how they described her in the press release: “The story features brilliant art to accompany the never-before-seen mystery that explores how the iconic and sexy Michonne discovered her impressive skills as a master swordswoman and became the most admired and beloved survivor.”

I’m sorry, people may have sex in The Walking Dead from time to time but I honestly don’t think any of these characters are written to be “sexy” and the first word that should come to mind when considering Michonne is “badass.” 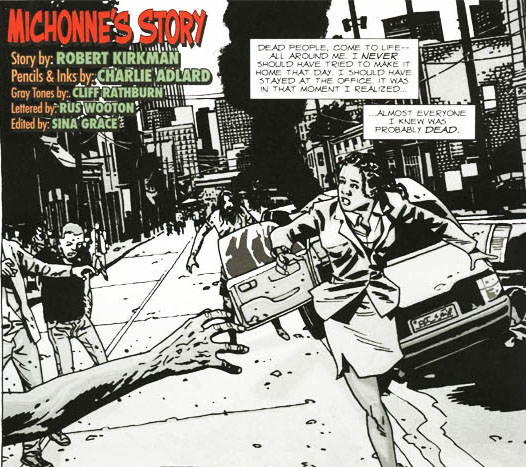 I’m not angry about the decision, I don’t know who approached who for this team-up, not do I want their job or head on a platter or even an apology. It just strikes me as slightly odd that this didn’t cause them hesitation. I wouldn’t have thought twice about the news had it not been Michonne, if instead it was the origin story of Andrea, Glen or someone else. I don’t think the choice was done maliciously, I just don’t think people consider all the angles sometimes or how this could be perceived. I suppose the train of thought was that Michonne will be showing up on the AMC show soon and they wanted to promote both that and the comic. But putting aside the issues I have placing this particular character in an adult magazine, it’s also a tough position to put long-time fans of the comic series in.

The news did not say whether or not the 6-page story would be released in regular comic or graphic novel format down the road and a lot of people don’t want to, or don’t feel comfortable purchasing a magazine like Playboy, men or women. I know the move was to reach a wider, possibly new, readership by publishing the comic there but perhaps another magazine would have been more well-received by fans. Rolling Stone perhaps?

That being said, yesterday, the Hollywood Reporter mistakenly published the entirety of the origin story on their website. It was later taken down and now only two pages remain, but I got a chance to read it before it was. And it was very good. Certainly what you’ve come to expect from Kirkman and Adlard, just, you know, not where you’ve come to expect it.

You can debate or defend the legitimacy or professionalism of Playboy if you want. Like I said, I have nothing against the magazine. Let’s not kid ourselves. If you removed the nude photos, the magazine wouldn’t be nearly as popular. That is what Playboy is famous for, and so placing a sexual abuse survivor’s origin story in its pages without some time spent unpacking the issue seems in bad taste to me.