What Did You Miss On The Walking Dead This Week? (Season Finale Edition) 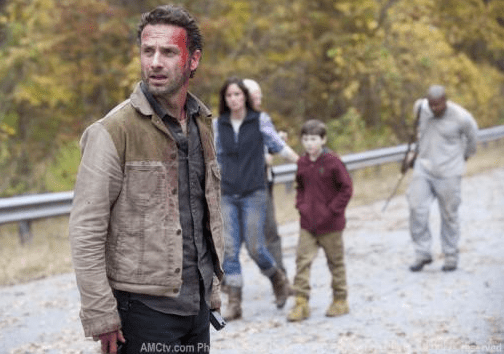 This is it, folks. AMC wrapped up Season 2 of their popular zombie apocalypse series The Walking Dead last night. Did it go out with a bang, a whimper, or a MMMMBRAAAAAAINS? Hit the jump for a recap from TV-viewer-only Sarah and thoughts from comic-reader Jill!

We open this week not on the farm, but in the city! Was that a helicopter I saw hovering above the buildings? The walkers there are headed out of the city for a weekend getaway, all in the same direction, for reasons unknown. It’s interesting to me that all the walkers still have all of their cardigans and shoes on just so. You would think they would be a little more disheveled. They all gather in a big gross group at the fence at the edge of the farm, pressing against it until it breaks. They head into the woods, but then Carl’s gunshot from last week rings out and they head toward the sound.

Rick and Carl are having a heart to heart about Shane’s death, not noticing the horde of walkers streaming towards them. How can they not hear all of the grunting, groaning zombies? The sound mixer turns up the volume on the zombies, and when they turn around Rick whispers for Carl to run. They retreat to the barn, although it seems like they could have made a break for the house.

The rest of the crew has also spotted the walkers at this point, and they conclude they have to leave the farm. Everyone except Lori, who wonders for probably the first time that day where the heck Carl is. She insists she won’t leave until she finds him. Good! Carl can get his comeuppance for wandering around all the time, and Lori can get hers for letting him.

Rick acts as a diversion for the zombies in the barn, then climbs the ladder to the loft, where Carl drops a lighter onto the crowd and sets them all on fire. Hooray! That was satisfying. The farm crew gets in their cars and drives around, shooting as many zombies as they can. Jimmy, who was manning the trailer in an attempt to rescue Rick and Carl from the barn (and who I had never seen before), gets mauled by zombies for his trouble. Lori is still looking for Carl. “Why can’t he listen for once!” she says. Because you don’t parent him! Goodness gracious!

Hershel is picking off walkers with a shotgun on the front lawn, and refuses to leave even as the farmhouse is clearly being overrun. He’s saved by Rick, who insists that the farm can’t be saved, and they all need to leave. Andrea and Carol are shooting zombies and making a run for it, respectively, and they are left behind (probably because Lori delayed so long looking for Carl — just saying). Carol is rescued by Daryl on his motorcycle and they take off, while Glen and Maggie hightail it off the farm in another car.

Once on the road Maggie panics, and Glen has her pull over so he can drive. He also tells her he loves her, which is sweet but I couldn’t help but notice he was leaving the engine on the whole time. Also, does no one want to try to listen to the radio? Maybe see what else is out there? Just an idea.

Rick, Carl and Hershel reach the section of freeway where they made a sign and left food for Sophia, and Carl pleads with Rick to go back to find Lori. Rick says it isn’t safe, and Carl storms off. For once, can one of Carl’s parents insist that he shouldn’t walk away from them at the slightest provocation? Hershel wants to wait to see if anyone else made it, but urges Rick to go on and protect Carl. “You’re a man of God. Have some faith,” Rick says, with a straight face. “Christ promised resurrection of the dead. I just thought he had something a little different in mind,” Hershel replies. I thought that was supposed to be a bad joke to break the tension and make the two characters laugh, but nope, that’s actual dialogue.

Rick is just about to listen to Hershel and leave with Carl, when Daryl and Carol show up, followed by Lori, T-Dog, Beth, and Maggie. Patricia and Jimmy are dead; Andrea is unaccounted for (As it turns out, she’s in the woods running from walkers and being slowly overrun. Just when all seems lost, a hooded figure with two chained zombies in tow appears and rescues her. Whaaaat?)

The group discusses Shane’s death and the curious fact that Randall turned into a walker without being bitten. Rick tells them that this confirms what he heard from Jansen at the CDC – they are all carriers of the zombie virus. Everyone looks appropriately grossed out at this news. They group drives until a shortage of gas forces them to make camp until they can find some more fuel the following day.

Rick takes the opportunity to tell Lori the real story of Shane’s death. Despite the fack that Shane lured him into the field to kill him, and that Lori herself was telling Rick how dangerous he was only a few episodes ago, she is horrified and storms away from Rick. When the group gathers around the fire that night, Carol urges Daryl to strike out on his own, since she doesn’t think much of Rick’s leadership. Maggie also expresses the desire to take her chances with Glen. Rick delivers an impassioned speech about how Shane tried to kill him first, and while they were friends once, he forced his hand. Then he says that if anyone stays with this group, it’s no longer a democracy. It’s a very weird way to try to recapture the allegiance of the group.

Everyone ponders this while Rick walks away for a moment alone, but nobody leaves. The camera pans away from the fire, out over the woods and over to an enormous mansion bathed in sinister light from the moon. Ooooh! Could this be the residence of that Governor I’ve heard so much about?

Grossest Moment: Jimmy getting eaten by a lady-zombie, in what resembled a really bloody makeout sesh.

My Anxiety Level In This Episode: 10! This show gives good finale! 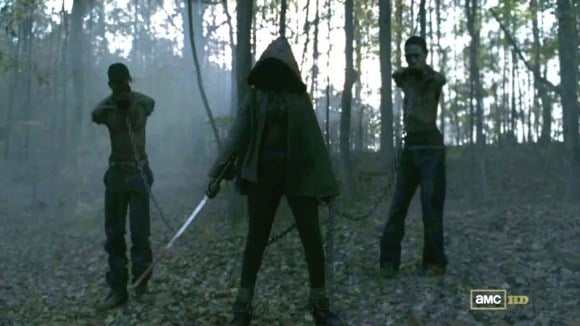 I think Sarah summed up what most non-comic readers must have been thinking when Michonne showed up, “Whaaaat?” My personal reaction was “YESSSSSSSS!” while holding both my arms in the air. Yes, I’m a geek.

Ok, let’s backtrack a bit. As a reader of Robert Kirkman’s comic, I’ve become increasingly aggravated with the delineations from the source material the last few weeks. I understand changes must be made, and I even approve of this course of action for the most part, but I was at my wits end last week. My thoughts were, I’ll watch the season finale and then decide if I’m going to stop watching. Well, they’ve pulled me back in.

I believe the finale is just what everyone, who thought this season had been lacking, was looking for. Actual, full-on zombie attacks that lasted more than one minute. I understand this kind of pace can’t be kept up or used in every episode but I think they need to use it more often so people don’t get bored.

Although I really enjoyed this episode, there’s still a few things that bothered me as a reader of the comic. First and foremost, Rick’s tumble down the crazy-hole in this episode. I realize characters have to have flaws but seeing a guy who, in the comic, is the only thing keeping his group going, start losing it on screen, really bothered me. Obviously that is what should be happening to him considering what he’s done the last few weeks but I’m of the mind none of that should have happened in the first place. Like Sarah, I’m also increasingly annoyed that the sole child in the group isn’t being watched with eagle eyes, not just by his parents but by everyone in the group considering what happened to Sophia.

As he has the last few weeks, Kirkman did an interview with The Hollywood Reporter about the episode, this time along with showrunner Glen Mazzara. There were some good things said, but also a few terrible things. For instance, an alternate version of last week’s episode they almost filmed. “There was a script that was released where Randall escaped and killed Herschel and he died in the same episode with Randall and Shane,” said Kirkman. “Herschel proved that there was a lot of story left to be told with him, which we’ll see in Season 3.” What? What? Stop it, you guys.

Also mentioned, the scene in Atlanta with the helicopter was a flashback to the earlier fall of the city. So the horde had been walking a long time. I guessed that was the case but they didn’t really make that clear in the episode and I have a feeling people thought that helicopter was presently flying. Perhaps they could have shown this horde moving closer throughout the entire season instead?

But of course the biggest news of the episode was the arrival of Michonne. Fans weren’t sure if she’d be showing up in the finale or next season because at that point, she’d hadn’t yet been cast, but we knew it was close. As soon as we saw Andrea alone in the woods I knew Michonne was going to save her life. And OOOOOEEEEE it was satisfying! The visual of Michonne with her two, armless, chained zombies was incredible and pretty much exactly how they all look in the comic. Her face was hidden in shadow from her hood so I assumed they still hadn’t cast an actress but sure enough, about an hour after the episode aired, they announced who would be playing her.

And that’s what cinched it for me. I’ll be watching Season 3 of The Walking Dead to see what they do with Michonne. I hope I’m not let down.

Of course there’s also the final shot of the episode. Fans know we were looking at a prison, the next stop for our weary travelers but well, it was kinda hard to tell what it actually was. I wondered what TV-viewers-only would think it was and, as you can tell from Sarah’s mansion guess, it was kind of ambiguous. They probably should have gone in a bit closer. Regardless, next season should make for some interesting stories. Fingers crossed.

One last thing. Can we have a moment of silence for Dale’s motor home? It went up in flames along with the barn last night without so much as an “aww Dale is gone and now his motor home is too, that is so sad!” *Sniffle* 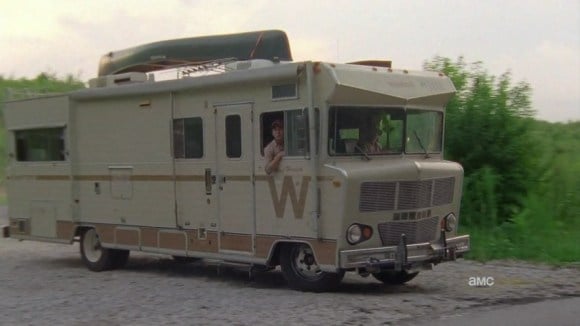