The New MakerBot, Replicator 2, Brings Us Ever Closer to a Sci-Fi Future 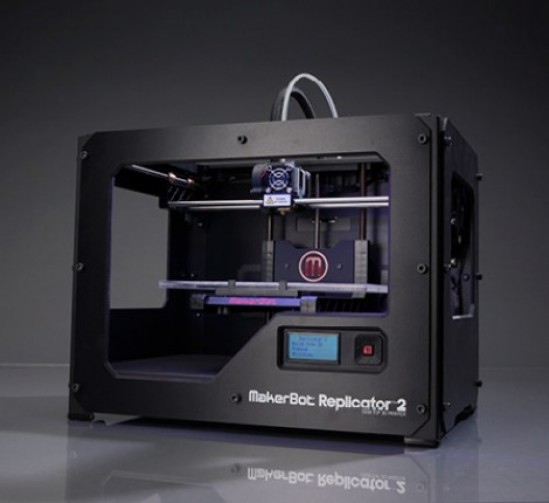 MakerBot Industries, the aptly named company that makes MakerBots, has just released their newest impressive printer-that-could. The Replicator 2 has a host of upgrades from previous models, and though it can’t take garbage off the street and print it into an edible dinner or usable firearm just yet, it wouldn’t be surprising to learn that we’re currently living in the time period when that kind of future technology got its start.

The Replicator 2 is MakerBot’s fourth generation machine. It sports a resolution of 100 microns, which is about as thin as a sheet of copy paper, and is said to provide a smooth surface to prints without any kind of post production work. The Replicator 2 also sports a build volume of 410 cubic inches — 37% larger than the previous bot — which allows for bigger and more intricate projects. MakerBot has also made their new machine work with PLA filament, which is claimed to “stick to the platform reliably with practically no peeling, curling, sliding or shrinking.” MakerBot also states the new PLA filament prints with 32% less energy than the previous ABS plastic printing material. The Replicator 2 also got a case makeover, now showing off an industrial strength chassis with temperature and humidity resistant powder-coated steel.

The Replicator 2 also supports Windows XP and 7, Mac OS X, and newer versions of Ubuntu, so not everyone is left out in the cold. However, what might leave people out in the cold is the $2,199 price, and that only includes one pound of filament to print objects with, so the little printer-that-could is actually much more expensive than it would seem at first. Check out a video of the Replicator 2 below, and if you’re going to impulse buy it, be sure the objects you print make the considerable investment worthwhile. Maybe figure out a way to print money.