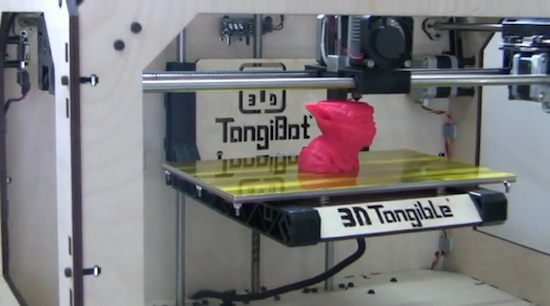 Right now, you can pop on Kickstarter and order yourself a Tangibot, pictured above. If it looks a little familiar, it should — Tangibot is a proud clone of Makerbot. In fact, a couple of tweaks aside, it is exactly like a Makerbot — except that it’s made in China, and thus costs about one-third less than the Brooklyn-based originals. Matt Strong, the man behind the Tangibot, isn’t shy about the similarities between the two products, either. Up until a few days ago, he leaned heavily on the Makerbot name — which is trademarked, even though the tech that runs it is open source. He’s recently replaced that wording with more generalities — Tangibot is now “a clone of a very popular open source 3D Printer.” Strong’s reliance on the Makerbot’s reputation to sell his own, barely modified version have earned him some bad blood from the very community he’s trying to appeal to.

Competition is good, and it makes products better. No one is suggesting otherwise, and let’s face it, this gets in a large way right to Makerbot’s open source roots. Even the models being shipped right now, while very cool, are not finished products. They’re pieces that are made for people to tinker with, things a community can work together to make better, but the sense that Strong is simply trying to stick a new label on an existing product, outsource the production, and make a quick buck seems to sour a lot of his potential buyers. It appears that a new group of 3D enthusiasts who have been waiting for a price drop to get into the action just aren’t there yet.

At the moment, it looks like Strong’s Kickstarter may have underestimated the crowd’s loyalty to Makerbot. As of this post, Tangibot has raised just over $31,000 of the $500,000 it needs to get off the ground, suggesting that the project may be over before it really begins. That’s heartening, in a way — it’s nice to see a community of folks dedicated to dancing with who brought them. It’s kind of what you would expect out of a community as active and generally supportive of one another’s projects as Makers tend to be, but still, it warms the heart.

That silve cloud isn’t without a dark lining, though. The general lack of interest in a product like Tangibot suggests that, outside of a hobbyist market that is quite happy with what they have, thank you very much, the market for 3D printers just isn’t there in a serious way yet. If Tangibot fails to get off the ground — and right now it it looks like that will be the case — it’s a clear signal to other people looking to improve or lower the cost of 3D printers for the home that their time may be better spent elsewhere.

It’s hard to see how that lack of competition is good for the Makerbot, or for 3D home printers as an industry. It’s even harder to see how the signal that 3D printing — even with a steep price drop — still has yet to capture the interest of the general public is good news for anyone involved here.