Well done: how I take my burgers and how I like my jokes. 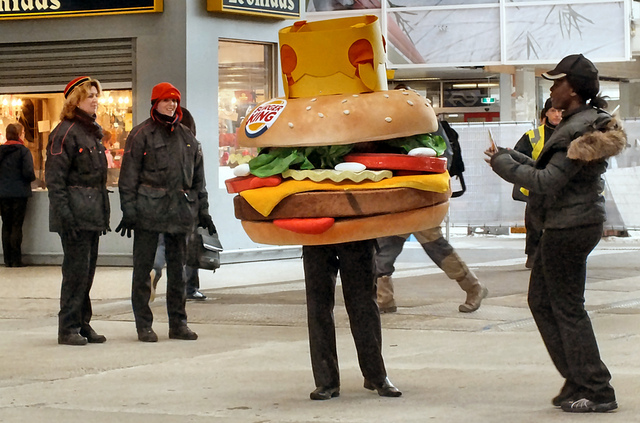 On April Fools in 1998, Burger King was serving two kinds of whoppers:  juicy burgers, and a big fat lie. The company was temporarily crowned the prank champion after taking out a full page ad in USA  Today announcing the release of an ergonomically designed, specially constructed Left Handed Whopper.

Burger King clearly sunk big money into their publicity stunt. According to the ad, the lefty patty was designed for the chain’s 1.4 million left-handed customers, with

all condiments rotated 180 degrees, thereby redistributing the weight of the sandwich so that the bulk of the condiments will skew to the left, thereby reducing the amount of lettuce and other toppings from spilling out the right side of the burger.

Jim Watkins, senior vice president of Burger King marketing at the time, explained that the Left Handed Whopper was the “ultimate ‘HAVE IT YOUR WAY’ for our left-handed customers.” The ad stated that the new burger would initially be available only in the US of A, but that the chain would consider rolling it “out in other countries with large left-handed populations”.

Burger King revealed the next day that the LHW was just an April Fools stunt and burgers, being circular, are ambidextrous, when they write at all. However, the damage was already bun: gullible customers of both hand orientations with deep concern over receiving the appropriate burger had thrown restaurants into chaos.

Left-handed carnivores: as a righty, I’m curious. Is a specially designed burger something you crave? Is condiment alignment of concern to you? Do you constantly find ketchup on your messily-tied ties? Let me know. I’m beginning to think a right supremacy conspiracy may have been at work.

(via TIME and The Museum of Hoaxes, image via Gerard Stolk)