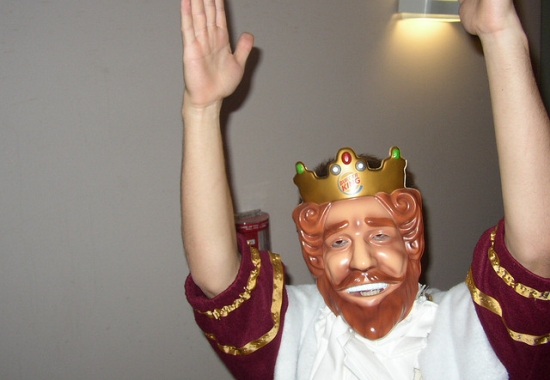 We all had a good laugh yesterday when Burger King’s official Twitter account got hacked, but while we give the hackers an “A” for effort, at best they get a “C+” for execution. Most of what was tweeted was nonsense, and the account was quickly suspended. The hack gave birth to something pretty special though, because someone was inspired to create the @PretendBK account, and they let you tweet on their behalf, giving you the keys to the pretend Burger Kingdom.

The way @PretendBK works is that whoever is behind the account also set up PretendYoureBurgerKing.com which looks like this: 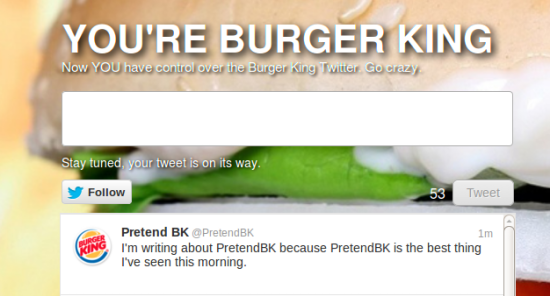 That box on top is a direct link to the @PretendBK account. Whatever you type gets tweeted from @PretendBK, and for some reason I find that kind of anonymous power irresistible. Most people have been using it to comment on the recent horse meat scandal in the U.K. or to rail against McDonald’s. And of course, since it’s an anonymous way to communicate on the Internet, there’s a lot of hateful and racist bigotry going on as well.

It appears as though someone is curating the account, because some of the more bizarre or offensive tweets don’t stay up for very long. This morning I spent a little time trying to see what I can get past the censor. The tweet in the picture above seems to have made it past no problem, but some of the more absurd submissions I tried were promptly taken down.

Out of decency I won’t repost some of the raunchier attempts, but my simple submission of “Karate farts” only lasted a few minutes before being deleted, which surprised me. It appears swearing or describing sexual acts is permissible only when talking about McDonald’s. Smartly, they’ve automatically disabled the “@” symbol in the text box. Although hashtags can be typed, it looks like an automatic deletion.

So why not take a little time our of day to pretend you’re the Burger King. (Ed. note: @PretendBK appears to have reached a daily limit for tweeting for today. Better luck next time! – Rollin) After all, it’s good to be the king — even if you’re just pretending.