Documentary About World’s Only Penis Museum Is Reportedly a Tearjerker 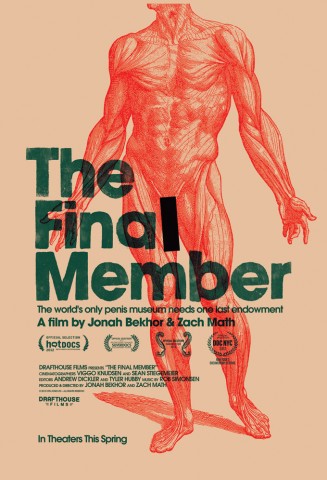 Much has been made of the Iceland Phallological Museum’s search for a human penis to complete its collection–and now there’s a documentary coming (ahem) to theaters this April that chronicles the museum’s quest for one last endowment.

For the world’s only museum dedicated solely to dicks, the Phallologial Museum is woefully isolated: the film’s official synopsis explains that it’s “thirty miles from the Arctic Circle, in the northern Icelandic town of Husavik”. For the past forty years, founder and curator Sigurður Hjartarsonhas has collected specimens from every mammal on Earth–except for one. Boys, that is your cue for subconscious leg crossing.

The Final Member is a dickumentary chronicling Hjartarsonhas’ long and hard quest to complete his collection and the two men who have volunteered their shafts as the definitive example of human masculinity. An Icelandic man has willed his penis to the museum when he dies, but American Tom Mitchell, who has nicknamed his member Elmo (presumably for unending “tickle me” jokes?) and tattooed it with the stars and stripes, sounds like the film’s most intriguing character. Mitchell wants Elmo in the museum, and he wants it there ASAP–i.e., before he dies.

Husavik’s museum is impressive and surprisingly adorable, as evidenced in this exclusive clip. Here’s the official trailer:

The Drafthouse film will be released in theaters and VOD April 18th, and early reviews claim the movie offers more than an excuse to make penis puns and laugh at oddballs (pun intended). Badass Digest says the movie is “hilarious and, believe it or not, touching…you must see The Final Member. I love this movie.”

I need no more persuasion.

(via Bad Ass Digest and io9, image via The Final Member)