"The Chi" Lena Waithe Paying it Forward | The Mary Sue 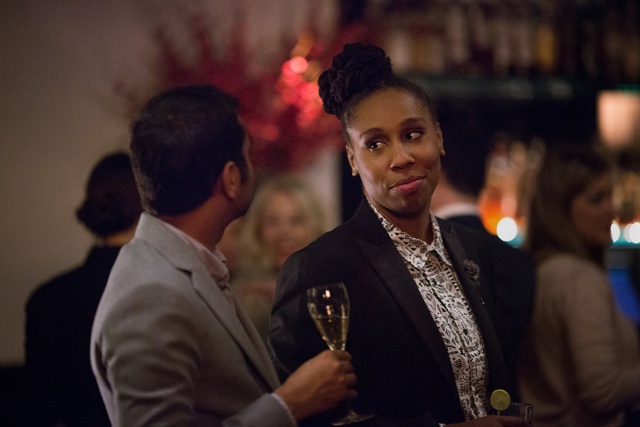 Lena Waithe has broken barriers. Her episode “Thanksgiving” in the second season of Master of None made her the first black queer woman to ever win an Emmy for Outstanding Writing for a Comedy Series. She was also behind the production team for the Dear White People movie which has led to the epic television show on Netflix. But now Waithe wants to use her acclaim to pay it forward and tell stories that humanize poor black people.

In her interview with The L.A. Times, Waithe explains that the first saw herself on television was watching Whoopi Goldberg on “The Spook Show.” For those who only know Whoopi from The View, I honestly pity y’all because while she is hella problematic, Whoopi was a trailblazer as an actress, comedienne, and performer overall.

“When she first was coming out she was doing prophetic work,” Waithe explains, leaning forward onto the iron patio table. “She was so raw and so honest that Hollywood came to her, not the other way around. I don’t know, there was something so dynamic about that special — her hair, her characters, just the way she moved her body, the way she changed her voice to step into a new character. I just remember thinking as a kid, ‘Oh, she knows me. But she’s never met me.’ And that to me, as a little black kid, was really phenomenal.”

Seeing yourself on television for the first time is an extraordinary experience because it then shows you exactly what you have been missing this entire time.

In my previous article about She’s Gotta Have It, I spoke briefly about respectability politics and how that has really hindered the ability of shows to really tackle and deal with the issue of black poverty in a smart way. Well, it appears that Waithe agreed with that sentiment and that led to her wanting to create her new show The Chi, which takes place in the South Side of Chicago where Waithe herself grew up.

“I remember watching the news a few of years ago — I was living in the San Fernando Valley,” Waithe says. “And there was this story about Chicago. And I’m seeing these young black kids be interviewed about gun violence … and I’m sitting there watching this young white man ask them these questions — no disrespect, but it made me upset. Like, they don’t know these people. Like, these people are not the problem, the system is. And it got me fired up. I wanted to show the people. I know who they are. They’re hard working. They’re funny. They’re human. They’re swaggy. They’re hustlers. The kids are like little grown-ups because of the world they live in. So I started writing. It was a thing that was in my body and my spirit.”

The Chi is the story of four characters Kevin, Brandon,  Emmett, and Ronnie, who are all “linked together by sheer coincidence as they seek redemption” in the South Side of Chicago.  The show was written during the Obama era, but now it will be airing during the Trump presidency, which Waithe thinks is actually better, considering the heavily polarized world we are living in right now.

“The show should come out under a Trump presidency because, at a time when the world wants to dehumanize us and kill us, we rise,” she says. “This is about showing us as people. Not perfect people. But as human beings. People who make mistakes. People who hurt. And to show why people do the things they do.”

The Chi airs this Sunday on Showtime at 10pm EST, however, you can get an early look at the series premiere on the Youtube page which has the first episode.