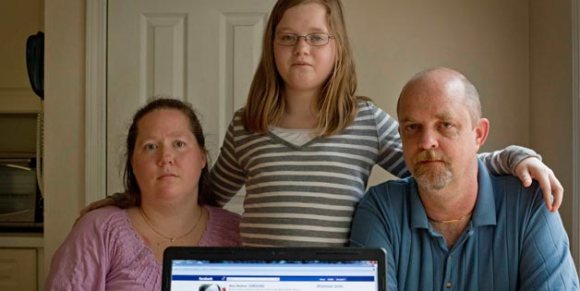 Alex Boston, like many teenagers, has been the victim of relentless and disgusting bullying on Facebook. Some kids thought it would be funny to set up a fake profile in her name, with a distorted picture, on which a false version of her spouted racist remarks among other falsehoods. But when she reached out to her school and the police for help, they didn’t provide any. And when she asked Facebook to take down the fake profile, but they (initially) refused to take down the fake account. Left without any other options, Boston and her parents filed a lawsuit against the kids who were bullying her, as well as their parents, claiming libel.

The lawsuit is against two of Boston’s classmates and their parents, the latter of which were deemed liable because they paid for internet access and then didn’t supervise their children’s activities. But why did it have to go as far as a legal tussle?

According to the school, there was nothing that officials at Palmer Middle School in Kennesaw, Georgia could do as far as Facebook was concerned because it all took place off-campus. If the bullies weren’t doing anything on school grounds, there was nothing the school could do about it; the same would have gone for texting. And what about the police? They claim their hands were tied, too, because there are no laws against cyberbullying in the state of Georgia. Their advice was to file a complaint with Facebook, who did nothing until the lawsuit was filed and the story was covered on CNN; that was when they finally deleted the account.

Here’s what was on the fake account created by Boston’s classmates: a picture tweaked of Boston that was less than flattering, posts to the account — and the accounts of others — that stated that the 14-year-old girl spoke “Retardish,” smoked tons of pot, discussed her sex life in graphic detail, was racist, and made other obscene comments. As a result of the profile, Boston was subject to “hatred, contempt and ridicule by her classmates and peers,” according to the suit.

But you know: kids will be kids. Filthy, disgusting, nasty kids. As the late Whitney Houston put it, “It’s not right, but it’s okay.”

The teens named in the lawsuit are being sued for “defamation and intentional infliction of emotional distress” and Boston is seeking punitive damages.