Magic: The Gathering Tournament Participants Not Immune To Sexism 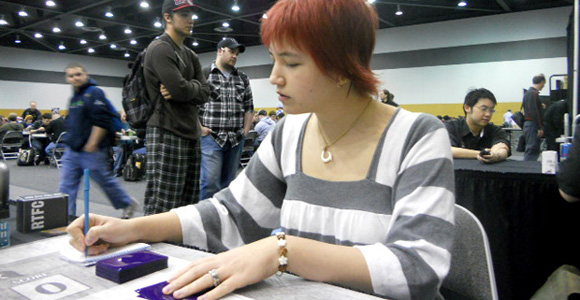 Jackie Lee recently competed in Wizards of the Coast sponsored, Magic: The Gathering Baltimore Grand Prix. She faired well in her matches, making it to the semifinal round, but ran into a huge problem once she got there. The livestreamed semifinals led to anonymous insults being thrown at her, simply for being a woman. Not that it would make a difference but no, these weren’t comments from her opponents, just random viewers of the match.

Unfortunately sexism in video games, or any gaming for that matter, is becoming a far too familiar story (see our related links). Magic is the collectible trading card game that took off in popularity when it was introduced in 1993. According to Hasbro, it’s still played by 12 million people and tournaments are held regularly, whether they be friendly or competitive.

Lee’s game was certainly competitive. There were 1,546 players entered to win a cash prize of $3,500. But she was singled out for her gender when she got to the semifinals.

Absolutely atrocious behavior that needs to be stopped. You may remember Bob Chipman, movie critic at The Escapist, who created a video discussing the recent situation at another gaming event. That one involved a few players from Capcom’s Cross Assault, in which team coach Aris Bakhtanians sexually harassed the female contestant he was coaching, in a televised match. He later inflamed the already hot situation by posting online that sexual harassment is part of a gaming culture. To which most of the sensible individuals in the world said, “No, it most certainly is not.”

What happens to put Lee in the spotlight in this situation is she’s one of the few women on the list of top ranked Magic players. Actually, she’s the only one. “Regardless of the support she garners from other female—and more commonly, male—players, Lee is in an unprecedented position,” writes Daily Dot. “She holds a ranking among the top 100 players worldwide. Hers is the only name among the top 100 that’s female.”

“Racism and sexism were nothing new, but being a champion did not spare Jackie Robinson or Billie Jean King. Jackie Lee is scaring people, as she is breaking down world views of a lot of people, ” said fellow professional Magic player and writer Patrick Chapin. “She is the best female player of all time already, and on the way up. She is also making it a lot better for everyone who is to come after her and she is doing a lot for Magic culture.”

But don’t worry, the company isn’t taking these situations lightly. “Wizards of the Coast, the Hasbro subsidiary that produces Magic: The Gathering cards (as well as other fantasy games like Dungeons and Dragons) has already made its position on sexual harassment clear. Last year, the company banned a player for life after he wrote an online post in which he threatened to rape a female Wizards employee.”

That employee was Helene Bergeot, the Director of Organized Play at Wizards. She wrote, “Disrespectful, harassing or bullying behavior, whether onsite or online, is not welcome at Magic events and violates Magic tournament floor rules.”

Lee herself is trying to shake off the experience. “I don’t personally care what this pack of children says about me, but I find it very sad, given that other women have told me I’m a source of inspiration. When your champion is getting publicly threatened with rape during a serious competition, I think that says terrible things about your community,” she told Daily Dot. “It’s been shown that in very heavily male-dominated professions, such as certain fields of science, when the number of women begins to approach 50 percent, the chilly climate evaporates. I’m hoping that as more women enter the tournament scene, women who play will finally be regarded as the norm, and we can all stop fussing about it.”

(via The Daily Dot, image via Wizard)

Previously in Sexism In Gaming