Everyone familiar with the movie (and the Stephen King novel) Carrie knows that the crux of the story lies in the relentless bullying of a teenage girl by her peers. And while bullying has existed since organic creatures developed the ability to judge each other, things are slightly different nowadays. People are (finally) a lot less tolerant of it, and those who try to write it all off as “kids being kids” are seen as negligent, trying to ignore a very big and enduring problem. And now, writer and director Kimberly Peirce, who is remaking Carrie, will try to keep the anti-bullying message alive.

We all know how Carrie ends: After being repeatedly shamed, mocked, and basically tortured for being, well, a little different (to be kind), Carrie White, who happens to have telekinetic powers, murders nearly everyone in her high school after having pig’s blood dumped all over her at the prom. Pig’s blood — a gentle reminder that she started having her period in the girls’ locker room and freaked out because no one bothered to tell her about how menstruation works. It’s a typical revenge story, but for many teenagers who are bullied for lesser reasons than being (let’s admit this to ourselves) a total freak, it might hit close to home. Especially now that a very bright spotlight has been put on standing up to bullying and supporting bullied kids so they don’t do something harmful to themselves or others.

Peirce, who was also responsible for another tragic and real story about being bullied, Boys Don’t Cry, said recently that her adaptation of Carrie — which will star Chloe Moretz as the title character — will also deal with the root of Carrie’s need for revenge (well, the root that isn’t her frighteningly oppressive mother): the kids who bully her on a daily basis. She said on her Facebook page:

… I have gone back to the wonderful STEPHEN KING Book CARRIE; I am also modernizing the story as one has to in order to bring any great piece of work written in one era into the next and especially given how very relevant this material is right now. Chloe is going deep into character to get this right….sewing her own dresses, spending time in her closet….and so much more….

Her Facebook page also has this fan-made poster, as well as a release date: March 15, 2013: 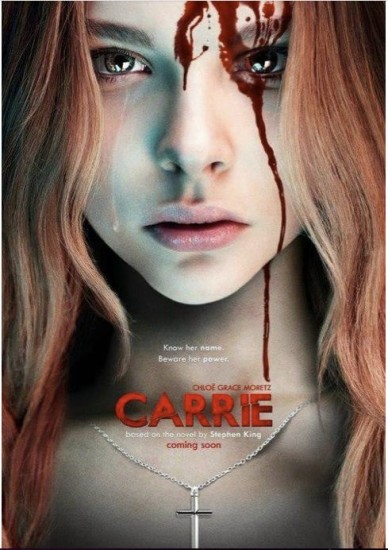 See the tear? And then the blood? This would actually be a really poignant and perfect poster, if it was real. I’ll admit, I groaned at the thought of a(nother) remake of Carrie, but it sounds like Peirce is probably the best person to take this on. Maybe we did need a remake of Carrie to remind us all what we’re doing to each other, even beyond high school.

(via Shock Till You Drop, Screen Rant)