Teddy Bear Meme Artist Didn’t Put Much Thought Into Drawing, Actually Quite Amazed People Are So Into It 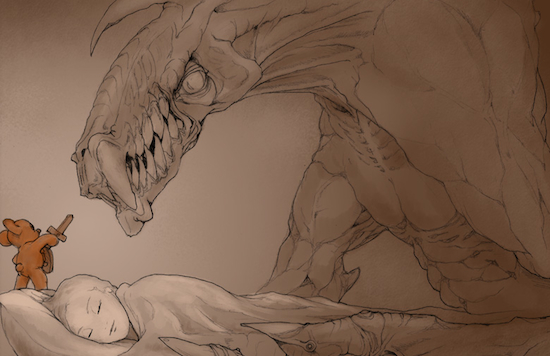 Earlier this week we reported that the above illustration entitled Sweet Halloween Dreams — created by Greek software engineer and artist Alex Panagopoulos — would be turned into a movie with Dwayne “The Rock” Johnson, Beau Flynn, and Hiram Garcia attached to the project as producers. While Panagopoulos has already sold the drawing’s film rights to New Line Cinema, there was no word on the artist’s own reaction to the life-changing news — until today. No doubt surprised by the overnight surge in popularity of his artwork, Panagopoulos still can’t believe that it was enough to merit this level of attention from the film industry.

In a quick interview with The Verge, Panagopoulos said that the rise in Internet prominence for Sweet Halloween Dreams began when someone posted it to Reddit. Soon after, another individual had turned it into a poster that circulated around Facebook, resulting in an increased traffic flow to his DeviantArt page, despite the fact that there were no attribution credits to the work. Panagopoulos also stated that due to this online celebrity status, people had approached him with various creative project offers, though none of them were truly appealing or lucrative save for the one put forward by Garcia.

Humbled by the experience, Panagopoulos is amazed that this work in particular was able to garner such recognition, especially when — in his own eyes — it isn’t one of his greatest or most memorable art pieces:

The DeviantArt community is especially warm and supportive, and people have left many comments the last couple of days. It is a bit overwhelming, to watch something I did very quickly a long time ago, and had mostly forgotten about [since] a year and a half ago, get so much attention suddenly.

Panagopoulos may be playing the modesty card for now, but once he gets that fat paycheck in his mailbox things might change. Why not? This generation could certainly use a defining artist, even if he is on DeviantArt.

(via The Verge, image courtesy of begemott)