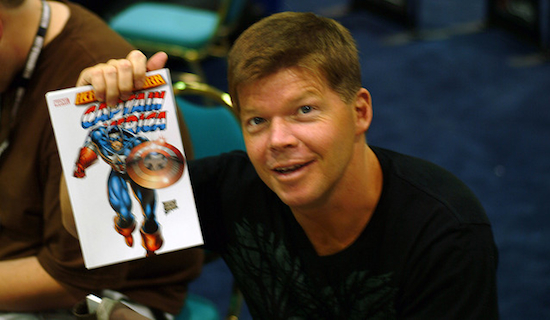 Whether you love him, hate him, or respect the man simply on the grounds that he puts up with all the vitriol each day with a smile, comic book artist and perennial punching bag Rob Liefeld was instrumental in the formation of Image Comics: A publisher that for over 20 years has provided an outlet for aspiring writers and artists to have their work published in an industry dominated by Marvel and DC Comics. Despite clashes within the company that led to his resignation in 1996, Liefeld believes that the legacy of Image Comics is one that needs to be told as a feature-length biopic, acknowledging the comic creators that risked everything to make their collective ambition a reality. Liefeld completed the screenplay for the film, called Icons, in just three days, and he’s cobbled together a wishlist of potential actors to portray some of the comic industry’s greatest. For the role of Liefeld, the man himself has chosen Chris Pine — as in the current Captain Kirk — for the honor.

News of the screenplay for Icons comes from DreamMovieCast, with the site reporting that the biopic will be narrated by Liefeld as he walks audiences down Image Comics’ memory lane, showcasing that fateful day when he and the future founders first met to the moment when they unanimously decided to bid Marvel farewell after royalty disputes.

Aside from Liefeld wishing Pine to step into his role, other actors in mind include John Cho as Jim Lee, Rob Corddry as Erik Larsen, Joe Mangeniello as Marc Silvestri, and the one and only Christian Bale as Todd McFarlane — because, really, who else would be fit to play the man who brought Spawn into the world?

Portions of the Icons script can be seen on DreamMovieCast, but in our opinion, we don’t think audiences would be able to take so many ’90s era superheroes donning shoulder pads, power armor, and headbands in one sitting. There’s only so much the human mind can take!