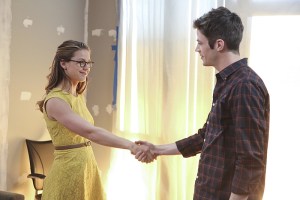 It’s official! Supergirl will be getting a second season! After weeks of rumors, CBS confirmed today that Supergirl will not only be flying into Season Two, but it will be joining its other DCTV bretheren over at The CW.

There was already a strong feeling that this would happen after the Supergirl/The Flash crossover. According to Variety:

The hotly anticipated crossover with “The Flash” on March 28 was a ratings hit for the CW, prompting the rumors to begin swirling once again that “Supergirl” would head over to the younger-skewing network, in order to nab a renewal. That episode, co-starring “Flash’s” Grant Gustin, averaged a 2.5 rating in 18-49 and 9.6 million total viewers in L+7 — the show’s best numbers in the second half of its run.

Well, the crossover aired on CBS, actually, but that’s not important. What is important is that it did well. Meaning that people want to see these worlds colliding. Having Supergirl at The CW just makes sense.

Well, after reaching out to the Supergirl press folks over at CBS, I was told that this is indeed a confirmed move. I’ve reached out to Warner Bros. for a statement, and will update this post accordingly once they respond.

I have to say, as a huge fan of Supergirl, and a big fan of everything The CW is doing these days (seriously, most of the shows I watch are on that network), I couldn’t think of a better match! Supergirl is finally going home! Let there be crossovers galore!