"What's say we step away from the nice lady. Settle this like women." -Barry Allen 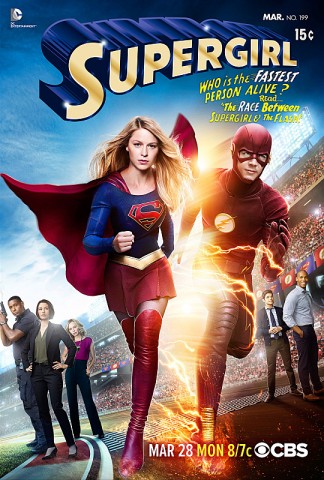 It’s the episode we’ve all been waiting for. #SupergirlxFlash! Let’s just get right to it, shall we? Yes, we shall. Welcome to Supergirl Season 1, Episode 18: “Worlds Finest.” 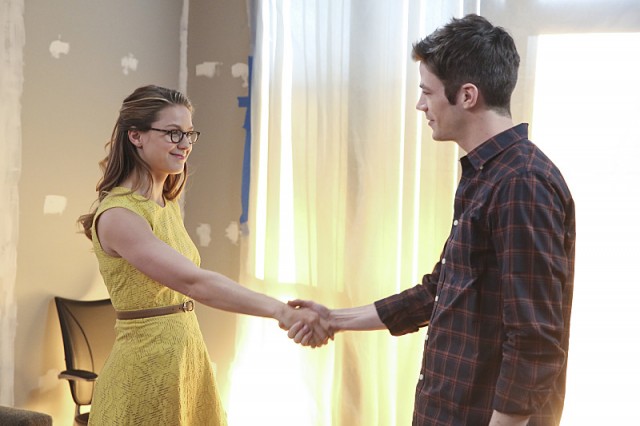 After Siobhan (Italia Ricci) mysteriously survived falling off a roof by screaming a scream so intense it cushioned her fall, Supergirl and Winn take her to the DEO to figure out how that happened. But the DEO has no clue, and Siobhan is pissed off that she not only knows what’s wrong with her, but that Kara is still walking around unpunished. She ends up catching a glimpse of a DEO inmate, Livewire (Brit Morgan), being questioned by Lucy about an electricity-related crime.

Meanwhile, Kara’s dealing with the fact that National City still doesn’t trust her after the Red Kryptonite incidents. She’s also dealing with her feelings for James, which are obvious to everyone—including Cat, who gives her unsolicited (and to be honest, inappropriate) but good advice about getting on that shit by basically doing her version of The Rules. Oh yeah, and she has to deal with the fact that she gets screamed out the window by Siobhan, who seems possessed and has come for vengeance. As Kara is about to fly, she’s caught mid-air and sped away—BY THE FLASH (super-awesome guest star, Grant Gustin)! Neither one knows who the other is (and they both seem kinda egotistically perturbed by that for a second), but Barry realizes quickly that he’s on another Earth.

Watching him explain who he is and where he’s from and the entire concept of Multiverses to Team Supergirl is HILARIOUS. Winn totally gets it. Anyway, Barry got here by accident, and he needs Team Supergirl’s help to get back to his Earth. James is all Jealous McJealousPants. Kara will help, if Barry helps her capture Siobhan and protect Cat.

Siobhan is freaking out about what’s going on with her, so she goes to her magical aunt for help (she has a magical aunt, okay? Who sells fake magic with a fake Irish accent, but is also actually Irish and magical) who tells her that the women in their family are cursed by The Banshee. Back in the day someone in their family pissed off a banshee, blah-blah. Look, the point is that when someone does one of these women wrong, The Banshee shows up to take them out, and this is how she has the screamy powers, and oh by the way, she has to kill the person who did her wrong, or risk losing her soul? Or something? Whatever. She’s a bad bitch is what you need to know. Oh, and she can target her screams anywhere in the world. This is important, because…

Siobhan breaks Livewire out of the DEO with a scream and leads her to an abandoned warehouse (the villain hideout du jour on all Earths) and asks for her help in killing Kara, which would also allow Livewire to get revenge on Cat. Livewire’s down, but not before she gives Siobhan a makeover, because she wants everyone to be goth, apparently. They lure Supergirl (and The Flash!) to Abandoned Warehouse Hideout to take her down so that they can “get to Kara” more easily. HA! Supergirl and The Flash escape, but barely. You see, while The Flash wanted to come up with a plan, Supergirl ran in half-cocked without a plan, because she’s so intent on saving people and earning trust back that she’s screwing stuff up.

Thank goodness Barry knows all sorts of Other-Earth technology! He not only supplies Supergirl with a device that will help defend her against Silver Banshee’s screams, but he also supplies the NCPD with technology for a metahuman prison! Which is a good thing, since when Silver Banshee and Livewire lure Supergirl and The Flash out in the open by kidnapping Cat, the heroes defeat the villains….well, actually, the surrounding humans defeated the villains. You see, in the fight, Livewire freaks out at seeing a helicopter (she got her freak powers in a helicopter accident, remember?) and tries to knock it out of the sky, but Supergirl gets in front of the blast. When she falls, the people are moved by her self-sacrifice and they stand around her protecting her from Livewire, and nearby firefighters end up blasting her with water, knocking her out of the sky. Her charge has leaped over to Siobhan, so she gets electrocuted and falls, too. They’re both fine—they’re just now in National City Metahuman Jail.

With the Villains of the Week wrapped up, Supergirl helps The Flash home by speeding him through the air, building on his speed, fast enough to open a breach back into his Earth. She then takes his advice and makes a move on James later that night. Except that after she kisses him, he walks out of her apartment and out into the street like a zombie—along with everyone else in National City…who’s human. Non has launched Myriad. Whatever the fuck that is. 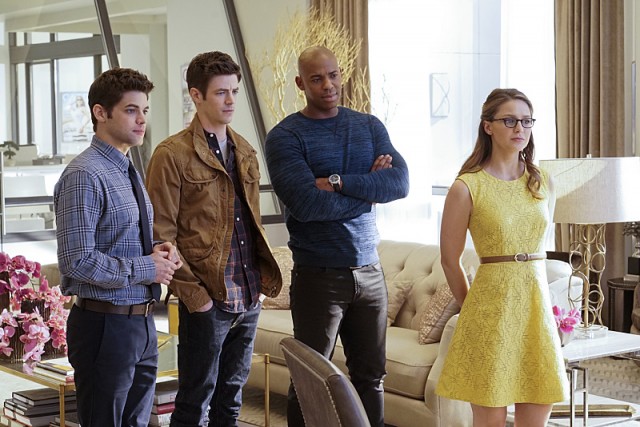 OK, so remember when I told you that “Falling” was my favorite episode of the season? Well, it still is—intellectually. But my favorite episode in my heart is “Worlds Finest.” Oh my God, I haven’t audibly squeed so hard to myself in a long time. Not only was this episode of Supergirl my Heart Favorite, it was also the FUNNIEST episode of Supergirl to date. Seriously, just about every person in this cast had some one-liner, or some reaction, that was PRICELESS and HILARIOUS:

I pretty much laughed through the entire episode!

A lot of that had to do with the chemistry between Melissa Benoist and Grant Gustin. Supergirl and The Flash need to have their own Buddy Cop show IMMEDIATELY. They are seriously the best thing ever together, and it was so great to watch them each bring out the best in each other performance-wise. It was also amazing to see Barry in a mostly-female environment in his scenes with Supergirl, Livewire, and Silver Banshee. Honestly, I hope he takes this attitude of “handling things like women” back to his Central City with him to remind him that the women in his life don’t always need his protection or second-guessing. In any case, I love that Supergirl has so many female villains and that they’re being used well. I also love seeing Lucy Lane running the DEO! 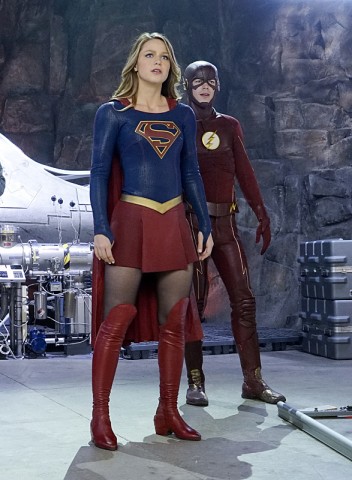 I had mixed feelings about the Kara/James stuff. On the one hand…*pukes* On the other hand, it was thematically appropriate in this episode, in which Supergirl learns to navigate the difference between when to act, and when not to act. Also, they had a great kiss (and Mehcad Brooks’ mouth is like whoa. I’m sorry, but it just is).

All of my nit-picky problems were in the Siobhan storyline. The biggest nit I picked? The fact that, supposedly, The Banshee comes out when someone does her wrong. The thing is, Kara didn’t actually do her wrong. Siobhan thinks Kara did her wrong, because she’s not taking responsibility for her own actions, but Kara didn’t wrong her. So basically, The Banshee arrived in Siobhan pretty much just because she was pissed at Kara, which undermines that character.

I also thought there was a missed opportunity in the scene where the people take down Livewire. It’s clear at that point that Siobhan is not down to hurt innocent people, and as I watched the scene play out, I expected Siobhan to scream Livewire down. Instead, she just stands there and gets caught up in the electrical shock. Siobhan could’ve helped Supergirl, and the people of National City could’ve still fallen back in love with Supergirl for being willing to lay down her life to protect them. Instead, it’s as if we’ve lost Siobhan’s humanity completely. I was hoping to see some sort of redemption for her.

Lastly, as much as it was hyped up to be so, I’m glad that the “race” between Supergirl and The Flash wasn’t actually a race. They joked about who was faster throughout the episode, sure, but in the end it was all about working together and running side-by-side in order to help each other. That is an important lesson for Supergirl‘s young fans to remember. Hell, grown-ups could stand to remember it, too.

“Worlds Finest” was a thrilling, funny, and joyous episode that did not disappoint. I hope Barry “accidentally” finds himself in National City again soon!

What did you think? Let’s talk Supergirl in the comments below!

Supergirl airs Mondays at 8PM ET/PT on CBS. For more Supergirl fun, check out The House of El—February’s video is up now, and March’s video will go up this week!