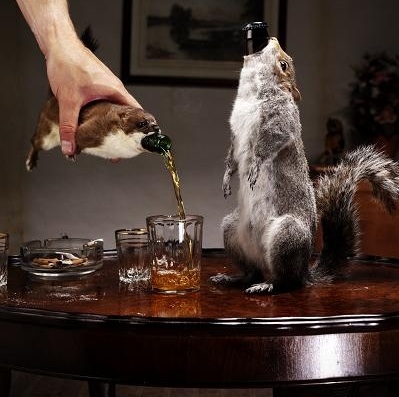 Your prayers have been answered: Scottish brewery BrewDog, which has pushed the limits of high alcohol by volume beer before, announced this morning that they’d broken the world record for strongest beer ever with The End of History, a 55% ABV behemoth that is named for Fukuyama’s famous work on the future of Western democracy. Oh, and the beer comes wrapped in taxidermied dead animals. (Which BrewDog assures us is roadkill.)

BrewDog made only eleven bottles of The End of History; despite the fact that they sold for either 500 or 700 pounds (~$800 or $1100 US), depending on the animal, the beer is already sold out.

While BrewDog’s high ABV beers, which have previously hit 41% ABV and 32% ABV, are a surefire way to draw press attention (and, apparently, make bank), not everyone in the beer world is a fan. The main reason: They stretch the definition of ‘beer.’ At 55% ABV, or 110 proof, The End of History is stronger than most vodkas, which are usually around 40% ABV (80 proof). How is that possible?

Beers, as you know, are produced by fermenting a mash of starch and flavoring, but the yeast used in that fermentation process typically dies off at about the 12% ABV mark. As a result, some brewers have developed so-called “turbo yeast,” which can withstand alcohol concentrations of as high as 20%. But that’s a long way off from 55%. To get that extra distance, BrewDog and its chief competitor in the high-ABV arms race, Kleinbrauerei Schorschbrau, use ice distillation, which takes advantage of alcohol’s lower freezing point than water to filter out the stuff that isn’t alcohol and build up the concentration. Ice beers produced using this process like Bud Ice and Molson Ice are common enough and are widely accepted as beer, but distilling as extremely as BrewDog does raises the question of whether the stuff that’s produced is ‘beer’ at all or really just a distilled spirit.

Whichever side you come out on, you’ve got to grant it to BrewDog that they know how to self-promote. Here’s the video they put out announcing The End of History: