The above still, from Empire, is just one of a handful of shiny, fancy hi-res stills released from Christopher Nolan‘s The Dark Knight Rises. (We brought you the first look a few days ago.) But that’s not all we have for you today! Christian Bale himself recently conducted an interview and has provided a lovely collection of quotes about his equally lovely co-stars!

The interview by the Philippine Daily Inquirer didn’t reveal any secrets (because Nolan has trained his actors so, so well). But Bale did have some nice things to say about the people with whom he’s working. On Selina Kyle/Catwoman, Anne Hathaway:

“… I was there when we did the screen test for her. The thing that I said to Chris [Nolan] that day was that there were many very accomplished actresses who had read for the role. I’m terrible at auditions, so I’m very impressed when somebody really seems to acquire an ownership of a character without having worked on it or prepared for some amount of time. I saw that in Anne. When Chris watched the screen test, he agreed that Anne did a wonderful job. In many ways, she has the hardest job. There are a number of people who feel that the Catwoman role has been defined previously. So, I always saw Anne’s role as being the toughest job of any of us. …”

“Joseph is a very intriguing guy. I would see Joseph’s performances in other films while we were filming. He’s somebody who truly seems to love acting. He’s a good, smart guy. He did a very good job in the movie.”

And on Tom Hardy:

“[A] phenomenal actor. I like working with him a great deal. He goes the whole hog. I know that Bane has been seen in movies before. But, in my eyes, Tom is essentially creating Bane for the first time so there’s great freedom for him to be able to do so.”

And finally, on the last time he took off the Batsuit:

“I wrapped a few days ago so that will be the last time I’m taking that cowl [Batman hood] off. I believe that the whole production wrapped yesterday, so it’s all done. Everything’s finished. It’s me and Chris -– that will be the end of that Batman era.”

Anyway, the new issue of Empire Magazine is all about The Dark Knight Rises, and in addition to the top pic, here are a couple of others: 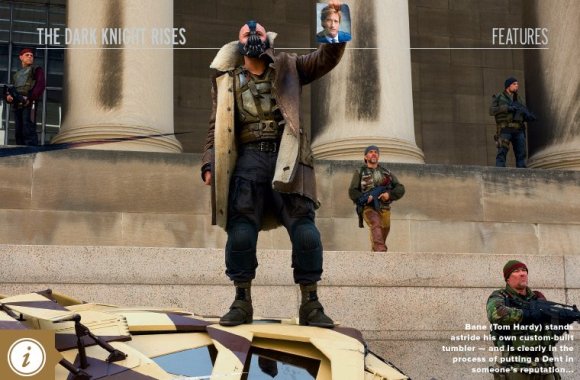 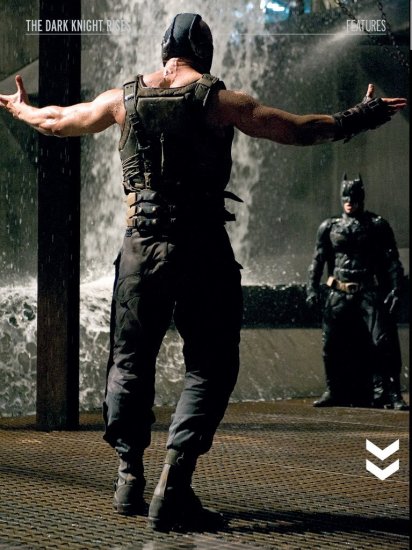