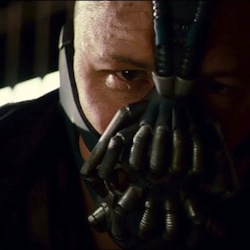 He looks really intimidating! There’s a three-year-old in me that’s going, ‘Oh my God that’s Batman! That’s Batman and he’s going to hit me! But I love Batman!’ Then I look in the mirror. And I hit him back. Twice as hard. — Tom Hardy, on working with a Bat-suited Christian Bale.

There was a point about halfway through the hype lead-up to The Dark Knight that I realized that Christopher Nolan absolutely understood what made the Joker work as a villain and as Batman’s arch-nemesis. Here’s the moment that makes me confident in his take on Bane:

Bane’s a very different kind of villain than Batman has faced before in our films. He’s a great sort of movie monster, but with an incredible brain, and that was a side of him that hadn’t been tapped before… [Tom Hardy] has this incredible disjunct between the expressiveness of the voice and the stillness of the movement of his body. He’s found a way to play a character who is enormous and powerful with a sort of calm to it, but also is able to be incredibly fast at times. Unpredictable. He just has a raw threat to him that’s extraordinary. It’s a very powerful thing when you see it come together, beyond what I had ever imagined. That’s what you get from working with great actors.

(Quotes from Empire via Deadline.)