Steven Moffat Says the End of Our Time With the Ponds Has Come, Confirms “New Friend” 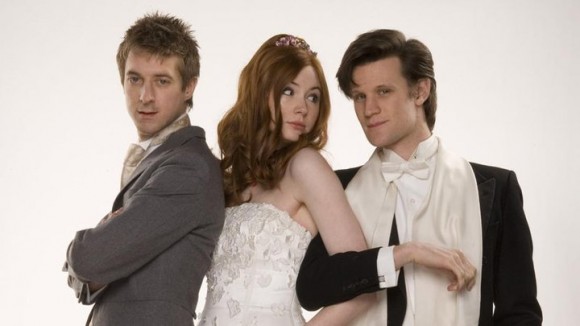 When Steven Moffat said that he’d be taking Doctor Who in another direction in the future, he failed to mention whether or not that meant a new companion — or set of companions — for the Doctor. Until he spoke after a screening of this year’s Christmas special, when he confirmed that the Doctor would be meeting “a new friend” and that the Ponds days were numbered. And it was going to be “heartbreaking.” You know, Steven Moffat has a funny way of spreading Christmas cheer …

There is still some debate on what kind of roles, if any, Karen Gillan and Arthur Darvill have in the rapidly approaching Christmas special. But what has been speculated upon for a while now has finally been confirmed: the Ponds’ tenure as the Doctor’s companions is definitely coming to an end, and soon. We will get one more season with Amy and Rory, and then, according to Moffat, the Doctor (who will still be played by Matt Smith) will meet a “new friend”:

“Amy and Rory will be rejoining us next series and joining the Doctor back on the Tardis, but the final days of the Ponds are coming – and during the next series. I’m not telling you when and certainly not telling you how. But that story is going to come to a heartbreaking end. There are only so many more adventures with the lovely Amy and the lovely Rory. So that story, next series, during the series will be over. And then the Doctor is going to meet a new friend – and I’m not going to tell you anything about he, she or it!.. Who knows? It is Doctor Who. There’s a universe of people to choose from.”

“A heartbreaking end”? What is that supposed to mean? Is he referring to just the heartbreak of their departure by itself, or will Steven Moffat emotionally torture us by doing something tragic to our favorite married TARDIS travelers? it’s probably safe to say that there is no way we’ll know any of this until the episodes start filming next year. In the meantime, we’ll just sit here, writing bad fan fiction in our heads, thinking about all the gut-wrenching possibilities … and then wondering who in the world could replace them.