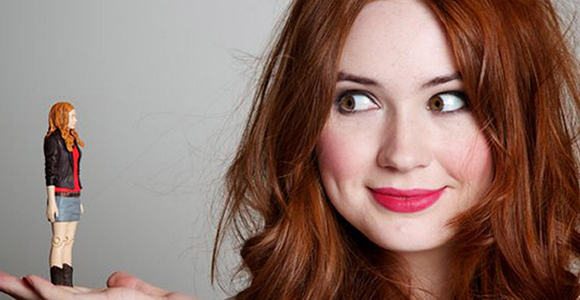 Actress Karen Gillan hit the jackpot when she was cast as the newest companion added to Doctor Who history. Now that Season Six is on DVD, she has a chance to relax. And by relax I mean, do other work that’s not Doctor Who. Gillan recently spoke with the L.A. Times about the latest season, people who cosplay as Doctor Who characters and what she’s up to now.

The Season 6 episode The Girl Who Waited featured Gillan in aged prosthetic to make her look like an older version of herself. She called it one of the weirdest experiences of her life. “It was horrible, actually, because I realized that I don’t age well at all,” she said. “And my parents found it so strange, because they were like, ‘You should never see your child that age.’ It’s kind of almost like the wrong way around.”

But what really scares Gillan is the villains The Silence. “They are absolutely hideous physically. I find them repulsive,” she said, adding that she thinks this season was scarier than the past. “People are worried that it’s gotten too scary for kids, but I really think that kids love being scared. I loved being scared when I was a kid. The thrill of it, it’s like going on a roller coaster.”

As far as this past season’s big surprises, Gillan said they usually don’t know more than the audience. “Basically Steven Moffat tells us what we need to know, but we are finding out things as we read the scripts,” she said. “Like, I did not know that River Song was Amy and Rory’s daughter until we got the script for that episode. Because if I’d known that, it probably would have changed the way we interacted with one another, River and Amy. So it’s kind of good that I didn’t know that. And it’s kind of cool because you get the surprise element.”

Although Gillan said she is definitely coming back for next season, she has no idea about any plot points. But you will get to see her before the new season premieres. “I’m making a brief cameo appearance with Arthur Darvill in the Christmas special,” she said, “Steven Moffat says it’s not Christmas without the Ponds, which is lovely.”

The actress has made many convention appearances since her hiring and made it to Comic-Con International in San Diego this past year. “I didn’t even get dressed up for Halloween this year. But I love going to conventions because you get to spend a day with people who are really enthusiastic about the show you work on,” she said. “It’s brilliant. It’s tiring, but I could never complain about it.”

She also mentioned a few surreal experiences she’s had with fans. “Walking down the street in Comic-Con in San Diego with Matt [Smith]. And then just running into the Doctor and Amy was really strange, ’cause we all stared at each other for a second, like ‘Whaaaat is thiiis?’ and this was just on the street. It was just the weirdest thing,” she said. “There was a woman in New York who proposed to me dressed as David Tennant. That was quite strange. It’s something to tell the grandkids.”

In her off-time, Gillan is doing a play on the West End in London at the Donmar Warehouse called Inadmissible Evidence. She also filmed a role playing 1960s British model Jean Shrimpton for the BBC that she says will eventually air on the U.S. cable network Ovation.