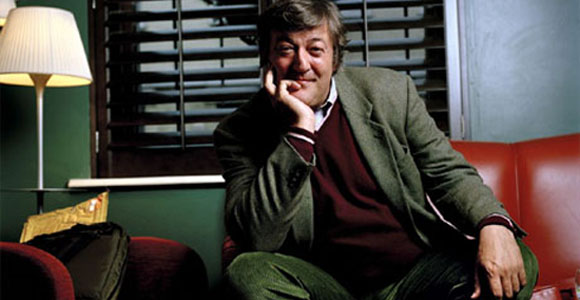 Video game publisher Electronic Arts has been in the news a lot lately and the news hasn’t been good. Their BioWare division has been receiving a lot of flack about the ending of Mass Effect 3 (causing them to create a whole new ending for the fans who complained) and the company as a whole has had to defend itself against thousands of letters complaining about same sex relationships in their games. Now, British actor Stephen Fry has taken it upon himself to not only give a huge vote of confidence to EA, but also promote All Out’s campaign to help them combat the letters with a petition. Hit the jump for what he had to say.

The letters EA has been getting are directed toward their recent releases, Mass Effect 3 and Star Wars: The Old Republic. They were addressed to the higher-ups at the company and demanded that same-sex relationships and content be removed from their titles. For the record, same-sex relationships in-game are choices, not forced on the player, and have yet to actually appear as an option in the Star Wars game.

Jeff Brown, VP of corporate communications told Games Industry, “Every one of EA’s games includes ESRB content descriptors so it’s hard to believe anyone is surprised by the content. This isn’t about protecting children, it’s about political harassment.” He also clarified something. “EA has not been pressured by any groups to include LGBT characters in our games. However, we have met with LBGT groups and sponsored industry forums to discuss content and harassment of players in online forums. In short, we do put options for same-sex relationships in our games; we don’t tolerate hate speech on our forums.”

Fry, the openly gay, award-winning, frequent video game narrator and totally awesome actor, tweeted to his over 4 million followers on behalf of EA and a petition looking to counteract the letters: “If you do 0 else today, do join me and @Yoda to help game-maker @ea stand strong against anti gay hate & the dark side allout.org/theforce”

The link leads to a petition from All Out that reads:

Electronic Arts (EA) — one of the largest video game makers in the world – is the target of a hateful boycott campaign. Why? Because they gave players the option to include a gay romance story in one of their most popular games: Star Wars: The Old Republic.

Anti-gay letters are flooding Electronic Arts headquarters, calling for a boycott. Without our help the company, its staff and more than 100 million registered players could be pushed to the dark side if the forces of hate get the last word.

Master Yoda wants to make sure Electronic Arts knows anti-gay haters don’t win the game. Add your name to Yoda’s letter urging the company to stay away from the dark side. Yoda himself will deliver the message directly to the headquarters of Electronics Arts in Redwood City, California.

As of this writing, 31,881 have shown their support. They’re looking to reach at least 50,000. The letter campaign to remove the content from the games is similar to the recent attempt by the group One Million Moms to get JC Penny to remove Ellen DeGeneres as their spokesperson based on her sexual orientation and another to get Toys R Us to remove Archie Comics’ marriage issue from their stores because it was two men tying the knot. Neither was successful and something tells me this won’t be either.