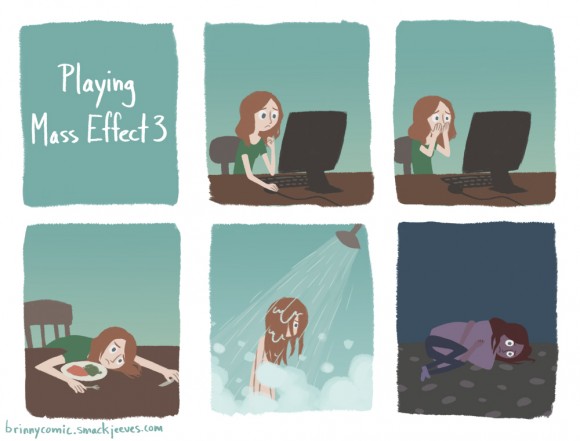 It’s been one hell of a month for Mass Effect fans. Since early March, the fanbase has been seething over the widely reviled ending to Mass Effect 3, with many actively calling for BioWare to change it via DLC. Two weeks later, BioWare announced that it was working on “game content initiatives” that would address issues of clarity and narrative. Today, fresh on the heels of The Consumerist naming EA as 2012’s Worst Company in America, and just in time for BioWare to potentially avoid a bloodbath at PAX East tomorrow, we have an answer.

Yes, there will be DLC that extends the ending. And yes, it will be free.

From the press release, posted to EA’s official news site:

BioWare, a Label of Electronic Arts Inc. announced Mass Effect™ 3: Extended Cut, a downloadable content pack that will expand upon the events at the end of the critically acclaimed Action RPG. Through additional cinematic sequences and epilogue scenes, the Mass Effect 3: Extended Cut will give fans seeking further clarity to the ending of Mass Effect 3 deeper insights into how their personal journey concludes. Coming this summer, the Mass Effect 3: Extended Cut will be available for download on the Xbox 360® videogame and entertainment system, PlayStation®3 computer entertainment system and PC for no extra charge.

The press release included a brief statement from Casey Hudson, the executive producer for the Mass Effect series.

We have reprioritized our post-launch development efforts to provide the fans who want more closure with even more context and clarity to the ending of the game, in a way that will feel more personalized for each player.

Okay, so “cinematic sequences and epilogue scenes” don’t sound like something that will provide much gameplay (and if Shepard died in your ending, as was the case for most players, that raises some serious questions as to how you’d be able to play at all). It’s also worth noting that just yesterday, Edge Magazine quoted Jennifer Hale, the voice of FemShep herself, as saying that BioWare had yet to contact her regarding any new recording sessions (there is a rumor circulating the BioWare Social Network forums that Mark Meer, who voices BroShep, has been scheduled for recording, but I have yet to find a credible source confirming that). Of course, recording can happen very late in the development process, so at this point, it’s anyone’s guess as to what the Extended Cut will actually contain.

A short while after the press release went out, a “mini FAQ” was posted to the official BioWare blog, which addressed the questions sure to be on most fans’ minds.

What can fans expect from the Extended Cut DLC?
For fans who want more closure in Mass Effect 3, the DLC will offer extended scenes that provide additional context and deeper insight to the conclusion of Commander Shepard’s journey.

Are there going to be more/different endings or ending DLCs in the future?

No. BioWare strongly believes in the team’s artistic vision for the end of this arc of the Mass Effect franchise. The extended cut DLC will expand on the existing endings, but no further ending DLC is planned.

What is BioWare adding to the ending with the Extended Cut DLC?

So while the content of the DLC is still unknown, the ending will not be retconned out of existence, as some fans had hoped. This development is also sure to be fuel for the supporters of the Indoctrination Theory (spoilers), who have suggested almost from the get-go that the ending was not all that it seemed. In any case, while this news is tentatively good for the Mass Effect fanbase — and very noteworthy for the gaming industry at large — it does mean that unless BioWare reveals further details at PAX, fans will have to continue what they’ve been doing since March 8 or so: speculating madly.