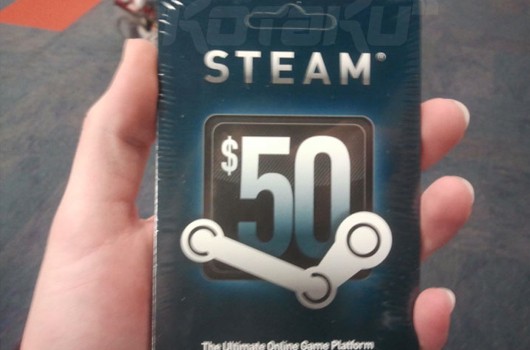 Word on the digital street is that GameStop is going to start selling Steam gift cards next week. Reports come from Kotaku, who heard the news from a GameStop source. The cards are expected to start going on sale on May 15th, and will open the wide world of the Steam Marketplace to anyone who doesn’t have access to a credit card or any other digital payment options. Alternatively, it might allow those of us who can’t control ourselves to preemptively set up a system where we’ll only binge on Steam sales in $50 bursts.

If true, this is an interesting change of position for GameStop. After all, it seems like it wasn’t that long ago that GameStop employees were instructed to open new copies of Deus Ex in order to remove free coupons from OnLive, which GameStop higher-ups seemed to consider a dangerous, competing service. Now, GameStop is selling money to an even more dangerous (read: awesome and better than GameStop) service?

The logic here seems to be:  If you can’t wedge yourself into the digital distribution market with your own marketplace platform, might as well skim the profits off the most profitable digital marketplace of PC games, even if it means encouraging customers to shop there because, let’s face it, there’s not anything you can really do to stop it. It seems to be a slightly self-defeating move, but so long as GameStop can still make money through insane methods like essentially selling money for other services, or offering physical “copies” of digital downloads by way of codes printed on cardboard, they might as well keep doing it. I get the feeling they aren’t too long for this world anyway.