Academia Says That Spoilers Actually Increase Our Enjoyment of a Story 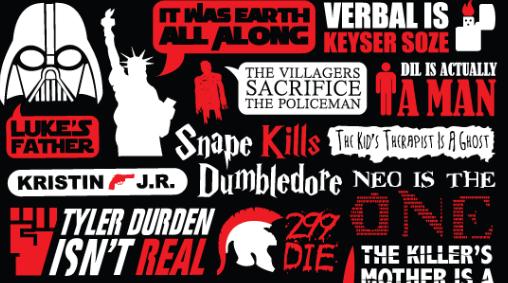 Every once in a while, a friend will yell at me for being a spoiler-lover. This usually only happens when they feel I’ve spoiled them on something (which I try to be careful about around the friends I know care about that type of thing), but when it does there’s always something dinging in the back of my mind, which is this constant fight I’m having with myself (and the people around me) over the value of knowing where a story’s going to end up.

Well, according to a study conducted at UC San Diego, being spoiled about a plot point or a twist can actually increase your enjoyment of literature.

Here is a summary of the experiment:

The experiment itself was simple: Nicholas Christenfeld and Jonathan Leavitt of UC San Diego gave several dozen undergraduates 12 different short stories. The stories came in three different flavors: ironic twist stories (such as Chekhov’s “The Bet”), straight up mysteries (“A Chess Problem” by Agatha Christie) and so-called “literary stories” by writers like Updike and Carver. Some subjects read the story as is, without a spoiler. Some read the story with a spoiler carefully embedded in the actual text, as if Chekhov himself had given away the end. And some read the story with a spoiler disclaimer in the preface. 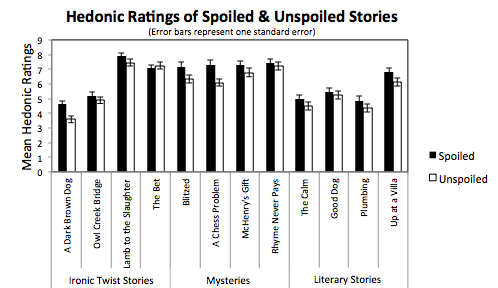 According to the data collected, every single story given was more pleasurable to experience if one had been fed a spoiler. Now, even for those who avoid spoilers like the plague this shouldn’t come as too much of a surprise: Romantic comedies and action movies and other formulaic Hollywood fare are still among the highest-grossing, most popular things out there. You may know what’s probably going to happen at the end of half of the movies in theaters, but that doesn’t stop many people from going to see them.

Now, don’t get me wrong, some things should just not be spoiled; I stayed off the internet for a week before the release of the final Harry Potter book because I would not be held responsible for my actions if some wayward soul had told me what was going to happen. I had invested years at that point into my own theorizing and analysis, and I wanted to find out for myself what the final book would entail.

But with certain stories, there can be something thrilling about knowing a bit about where they’re going. For me, it’s always been far more about that old adage: “It’s about the journey, not the destination.” Even if I knew who was going to end up with whom, or who was going to die, knowing these things was always kind of enriching to a story for me. If a writer has put enough forethought into such an outcome, theoretically watching them get there is even more important than what happens when they arrive. For me it’s a good litmus test of how thoroughly a writer had thought out their story.

It’s as Wired points out: Just because you know the end doesn’t mean there aren’t surprises. While watching the third episode of the first season, I once asked my friend for the spoiler on who killed Lily on Veronica Mars. I had that information on tap for the rest of the season, but that didn’t for a second stop me from being shocked at every twist the show threw at me.

And believe you me, if I watched True Blood without a steady supply of rumors for what’s in store, I might go stir-crazy with every cliffhanger.

This is not to say my spoiler-free friends are wrong, or that I don’t run away fast from certain spoilers; I will still do my best to respect their wishes  about how they want to experience stories, and I will still be pissed if someone knows I’m in the middle of reading or watching something and just blurts out the ending. Like many things, it’s about choice.

Still, this is an interesting study, and I’m interested to hear what our readers think about issues like this. What “spoils” a story for you and what just enhances the experience?