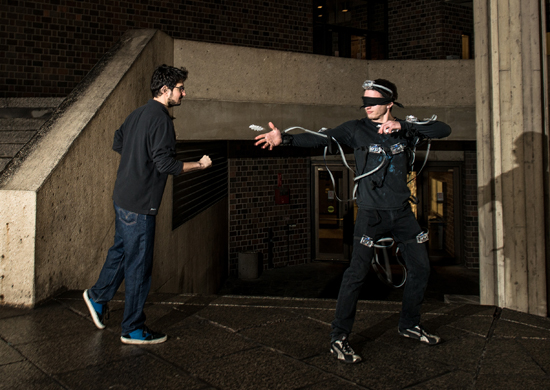 If there’s one ability of Spider-Man‘s that it would be most useful to have, it’d be his spider-sense. Being aware of dangers or hazards before they strike is pretty much the best. It’s essentially precognition, in a way. Who wouldn’t want precognition? Thanks to a special suit called SpiderSense, made by University of Illinois’ Victor Mateevitsi, this fantasy is that much closer to being a reality.

Mateevitsi’s suit functions by using microphones to send and receive ultrasonic signals that are then interpreted to determine if someone’s moving closer to the wear. Robotic arms attached to the suit then apply pressure in increasing amounts the closer someone gets. There are seven of these contraptions spread out across the suit in order to achieve as much ultrasound coverage as it can.

The suit was tested by having students stand blindfolded while others approached them. The students would then throw cardboard ninja stars — you can’t make this stuff up — at their perceived “attackers.” Mateevitsi’s trial had a 95% success rating, which is pretty promising.

SpiderSense still has a long way to go, especially if it’s meant to eventually help blind people. Right now it doesn’t seem to distinguish between obstacles, and the trial only had folks standing still and being approached by others. Even so, the whole thing’s pretty neat.

Mateevitsi will be presenting the suit at the 4th Augmented Human International Conference in Stuttgart, Germany on March 7th.

(VMateevitsi and New Scientist via Engadget, The Verge, image courtesy of Lance Long)